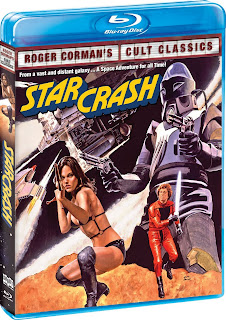 This week's new releases aren't so much spy DVDs as spy-related.  First up, there's The Spy Who Loved Me Bond Girl Caroline Munro's best star vehicle, Starcrash, finally available in Region 1 on a legitimate DVD, and Blu-ray, if you can believe it!  (Courtesy of Shout! Factory.) And it's quite a DVD (and Blu-ray), positively loaded with features!  (Different ones from that French 2-disc Special Edition a while back, so I'll hang onto that one, but definitely be buying this as well.)  Starcrash was a fairly wretched (but gloriously so!) really fun Star Wars cash-in starring Munro as a Barbarella rip-off in equally skimpy sci-fi outfits along with a very young David Hasselhoff (who weilds an actual lightsaber, something he could get away with in the days before Lucasfilm became as protective of their intellectual properties as they are today) and the great Christopher Plummer, clearly slumming. And a robot with a Foghorn Leghorn accent. It's also got a really terrific John Barry score, much better than the film actually deserves.  Starcrash is wonderful camp and essential for Munro lovers.  And it will really make you wish that that Seventies Modesty Blaise project she was supposed to star in had come to fruition!

Also out today is the never before officially available 1964 black and white BBC Sherlock Holmes series, starring Douglas Wilmer in the title role and Nigel Stock as Doctor Watson.  (This is the same series that Peter Cushing stepped into the lead for in the second, color season; the few Cushing episodes that survive are already on DVD.)  Sadly, the one real spy episode of the Wilmer series, "The Bruce-Partington Plans," is not included in this set because only a brief fragment of it survives.  I do wish they'd included the fragment (along with the surviving fragment of another wiped episode), but BBC chose to stick with complete episodes.  Happily, that still leaves us ten of them (plus the pilot, "The Speckled Band"), and I'm kind of surprised they fit them all onto only two discs.  Yeah, there's nothing spy-like about it, but it seems that a lot of spy fans are (like me) also Holmes fans, and this is probably the most exciting DVD release of the year for me, so it gets a mention!  Interestingly, Wilmer later played a rival of Sherlock Holmes on the spy-crazy second season of , and you can read my review of it here.
Posted by Tanner at 5:00 PM