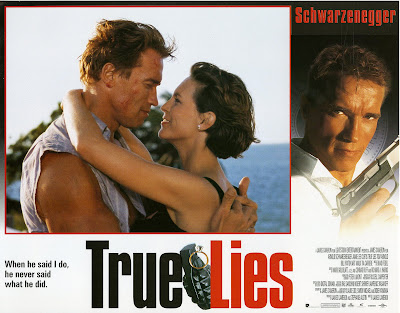 Earlier this week we learned that James Cameron was shopping around a new TV series based on his 1994 action romcom True Lies; today Deadline reports that ABC has snatched it up.  With Cameron attached to exec produce, it's not surprising that a network bit so quickly, nor is it surprising that the "premium deal" includes a "large penalty." That means that ABC will pay dearly if the project doesn't go to pilot or series, making it even more of a sure bet than it already was based on name recognition alone.  So this is actually happening!  Deadline points out that ABC hasn't had a significant spy series since J.J. Abrams' Alias went off the air.  Booking True Lies is obviously a direct challenge to Abrams' similarly themed spy show as marital comedy Undercovers, debuting next week on rival NBC.
Posted by Tanner at 6:27 PM