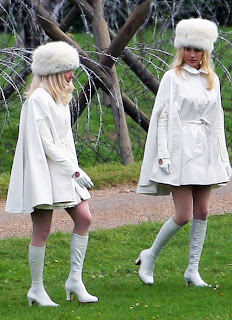 A few weeks ago we learned that Matthew Vaughn's X-Men: First Class, a prequel focusing on the younger days of the characters played in the other movies by Patrick Stewart and Ian McKellen, would be set in the 1960s, thus justifying the casting of James McAvoy and Michael Fassbender in those roles (and necessitating Fassbender's subsequent departure from Tinker, Tailor, Soldier, Spy). We also learned recently that Mad Men's January Jones would play Emma Frost, a character whose costume (a white version of Jean Grey's Black Queen costume... it's complicated) was based on Emma Peel's costume as The Queen of Sin in the Avengers episode "A Touch of Brimstone." (See a revealing costume comparison here.) Producer Brian Singer said that Vaughn was going for a "James Bond vibe."  Clearly, he's taking this Sixties setting to heart, and he's also, appropriately, going for an Avengers vibe!  AICN ran this set picture yesterday (depicting Jones and her stunt double in costume) along with a link to lots more great pictures at The Daily Mail.  (Check out that awesome Cold War era helicopter!) It looks like Emma Frost is Emma Peel!  Look at that dress! Is that an Emma Peel frock or what? And those boots! This is awesome.  I'm so excited for this movie now.  I hope that all of Jones' costumes are white variations on Diana Rigg's famous wardrobe. Will she wear a white Emmapeeler catsuit?  I have little doubt that eventually we'll see that skimpy leather Queen of Sin outfit... Personally, I love what Vaghn is doing.  The AICN Talkbacks are kind of disturbing, though, with a million variations on, "Is he making X-Men or Austin Powers?"  Yes, even nearly a decade on, Austin Powers is still tainting any references to Sixties spywear.  It's too bad.  Austin Powers is like the atom bomb; what was unleashed (while it seemed like a very good idea at the time) can't be put back in the tube.  It's out in the world now, and we've just got to deal with it.  Hopefully Vaughn makes an amazing Sixties superhero movie that finally makes people say "Austin who?"
Posted by Tanner at 7:45 PM