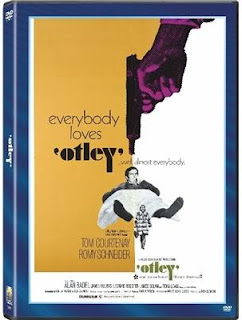 Woo-whee! (As Sheriff J.W. Pepper might exclaim.)  There are a lot of new spy movies out today!  It's an embarrassment of riches that makes me embarrassed by my lack of riches, because I want them all but my poor wallet just can't handle it.  It's time to start making my Christmas list...  The flashiest new spy title is Iron Man 2, featuring Marvel's two top superspies, Nick Fury and Black Widow, but the best is Otley (1968), one of my very favorite spy movies of all time.  (And yes, as I've often threatened, I will eventually get around to writing a "My Favorite Spy Movies" piece about it, and now I can hopefully illustrate that with screencaps from a lovely new transfer.)  But Otley, unfortunately, isn't a straightforward DVD, and you can't buy it in stores.

With the market for catalog titles on DVD apparently and lamentably dead (thanks as much to the advent of Blu-ray as to the downturn in the economy if you ask me), more and more studios are noticing the success of Warner Brothers' burn-on-demand DVD-R program, the Warner Archive, and emulating it.  We've seen Universal and MGM launch similar (if far less extensive) programs through Amazon, offering movies on DVD-R burnt to order. There are a lot of drawbacks to the formula: while they do generally look pretty good (with the occasional exception, like MGM's pitiful House of Long Shadows), most of the catalog titles released this way are not remastered with anywhere near the precision that a studio puts into a regular DVD catalog release, and they never offer any of the special features like making-ofs or commentary tracks that consumers became accustomed to in the heyday of the DVD format. Then there's the little matter that they're on DVD-R, and not real DVDs. And, worst of all, there's the price point, which remains awfully high for a featureless, sometimes un-remastered DVD-R. But the upside is a big one: programs like the Warner Archive mean that we get to see titles released that might never even have made the cut in the halcyon days of deep catalog releases. And while the quality might not be up to the standards of the few big prestige catalog titles that still come out (like The African Queen earlier this year), it's generally a far sight better than the gray market alternatives.  These DVD-Rs are like legitimate bootlegs, using the best available elements. Overall, they're a good thing in this marketplace, and I'm glad that more studios are jumping on the bandwagon.  Sure, I miss the past, when even obscure catalog titles would get the Special Edition treatment, but the realist in me knows those days aren't coming back, so fans of classic films have no choice but to embrace the DVD-R programs.  Well, there is a choice, but it amounts to those titles never coming out at all, and that's not acceptable. 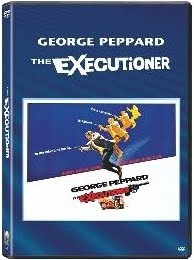 The latest studio to launch a Warner Archive-like program is Sony.  A little over a month ago, pre-order listings quietly started turning up on Critic's Choice Video and (more cheaply) their sister site, Deep Discount. (Sadly this post has existed in some unfinished form since then, when it was an "Upcoming Spy DVDs" post!) A press release finally materialized a few weeks later announcing "Screen Classics by Request" from the website Columbia-Classics.com.  (Listings for some of them finally materialized on Amazon as well, although Deep Discount seems to remain the best bargain.) The first batch officially becomes available today, and included in the hundred-odd titles are several spy movies!

Foremost among them is Otley. The great Dick Clement and Ian La Frenais (who would later become Sean Connery's go-to script doctors, making uncredited but integral contributions to the scripts for Never Say Never Again and The Rock) wrote this 1968 counter-culture comedic spy caper starring Tom Courtenay and a host of faces familiar to Sixties spy fans, including James Villiers, Leonard Rossiter, Romy Schneider and Ronald Lacey.  This is a fresh take on the classic "wrong man" subgenre of spy movie, starring Courtenay as Otley, a drifter adrift in Swinging London who (thanks in part to a beautiful woman) becomes accidentally embroiled in complex espionage plot and finds himself relentlessly pursued by eccentric characters representing several different mysterious groups with different goals.  The standout scene is a driving exam that turns into a wild chase through busy streets and even the green of the Goldfinger golf club.  It's absolutely essential spy viewing, especially for fans of that era.  (And who isn't?)

Other spy titles available from the Columbia Classics website include The Executioner, Man on a String and Duffy.  Duffy (also '68)is another incredible document of the late Sixties, again embracing the counter-culture.  James Coburn is the title character in this one, and the setting is the French Riviera.  The Executioner, starring George Peppard, Joan Collins and Charles Grey, represents the more serious side of the Eurospy genre.  It's a gritty and violent tale of double agents, double crosses and flawed heroes.  1960's Man on a String stars a pre-OSS 117 Kerwin Mathews in his first major spy role, as the handler of a real-life double agent played by Ernest Borgnine.  Borgnine's character is called Boris Mitrov in the film, but the real story is that of film producer and musical director (and spy) Boris Morros, whose extensive credits included a number of Bulldog Drummond movies in the 30s.

Other Screen Classics by Request that excite me and are likely to excite most fans of Sixties spy stuff include Fragment of Fear, a mod psychological horror film written by Goldfinger and The Spy Who Came In From the Cold scribe Paul Dehn, the awesome Sherlock Holmes vs. Jack the Ripper movie A Study in Terror and the campiest, craziest, trashiest American vehicle for Diabolik star John Phillip Law, The Love Machine.

But not all the spy titles out this week are made to order.  Iron Man 2 is not only available everywhere as a regular DVD, but also as a Blu-ray and in a confounding number of configurations on each format (single discs, double discs, combo discs, digital copies, etc). Spy fans will want to opt for the 2-disc Special Edition DVD

or the 3-disc Blu-ray/DVD Combo (also available in special metal packaging exclusively from Target), which include the special features "Spotlight on Nick Fury" and "Spotlight on Black Widow," as well as "S.H.I.E.L.D. Files," whatever those are. 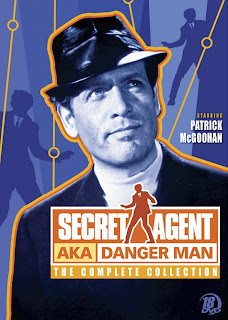 Finally, A&E is re-releasing Secret Agent AKA Danger Man: The Complete Collection.  This seminal Sixties spy series starring Patrick McGoohan (really the cornerstone of the genre on television) has been available before, but now A&E has shrunk the price and shrunk the size of the box, both welcome changes.  The previous set housed each disc in its own slim case; I haven't seen the new one but I'm presuming that it fits two discs per slimline, like TV shows from most other companies.  This set is excellent, and you can read all about it in my review of the its last incarnation here.  (The content has not changed.)  Suffice it to say, Danger Man has gotten lost in the shadow of McGoohan's less successful (at its time) but more enduring follow-up, The Prisoner.  It's much more than just a potential prequel to the later show; Danger Man is the first serious espionage drama of the modern era, and set the template for just about everything to follow. Retail is $99.95, but as with many A&E titles you can find this 18-disc set (containing every single episode from both the half-hour and hour-long series) for nearly half that at a number of online retailers.
Posted by Tanner at 10:53 PM

The trend towards releasing movies on DVD-R is even more depressing if you live outside the US, since it means they're more or less completely unavailable.

I agree about Blu-Ray - it's been a disaster for fan of cult movies.