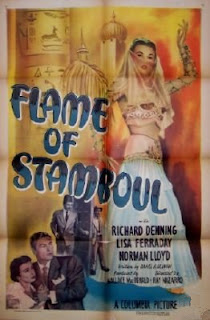 After the defeat of Germany at the end of WWII (and the end of the Forties spy classics that went with it) and before James Bond came along, most spy movies were simply crime movies with exotic settings. But as the Cold War warmed up, a few managed to subtly buck the trend in the 1950s, in some ways presaging the direction the genre would go in the Sixties, following 007's explosive cinematic debut. Columbia’s B-programmer Flame of Stamboul, directed by Ray Nazarro and starring the future governor of Hawaii Richard Denning, is surprisingly such a film. It’s not a very good film or a particularly exciting one, but what’s interesting about it is how many of the B spy movie tropes exploited to their fullest during the Eurospy boom are already in place. Flame of Stamboul has the settings (Istanbul and Cairo, both established via stock footage), has the strip clubs (in both cities) and the beautiful female spy who strips there (Lisa Ferraday), has the Macguffin (the military secrets variety), has the imposters so prevalent in the genre and even has the louche American hero whose traditional, square-jaw good looks are offset by his jerkiness and quickness to rough up a woman. It’s even got (oddly, for the Red Scare Fifties) a non-political villain (former Moriarty George Zucco–bald, naturally, and for most of the movie seen only in shadow and known as “the Voice”) of the sort later embodied by the agents of SPECTRE, THRUSH and CHAOS (“a spy with loyalty to no country, a mercenary selling information to the highest bidder!”). But what it lacks is more telling than what it has for students of the genre.

What Flame of Stamboul lacks highlights the possibly less obvious, but ultimately more crucial, ingredients of the spy movie as we know it in its 1960s-on model: actual location photography, a catchy, propulsive score, car chases, Technicolor, more than one beautiful girl, a smash-up finale and a substantial quantity of action that amounts to more than just fist fights and the odd shooting. Sure, not every Eurospy movie or American poverty row spy movie of the 1960s has all of those things, but the best examples of the genre certainly have at least some of them.

Location filming may be the most important ingredient of an escapist spy adventure for me. Actual shots of Rome, Madrid, Beirut and Istanbul (all of which even the cheapest Eurospy producers clearly had easy access to) really sell that difference from the standard crime movie, which were certainly a dime a dozen in post-war American cinema. After those grainy establishing shots from the film library, Flame of Stamboul is all sets–mostly cheap, indoor ones, with the occasional jaunt across the studio’s generic, single-street middle-east backlot.

Most spy fans have great appreciation for good scores, but it’s impossible to realize just how much those post-Barry beats add until you try to watch a movie of this sort without them. If someone with a whole lot of time on his hands were ever to re-edit Flame of Stamboul to, say, a Riz Ortolani soundtrack, I have a feeling it would feel a whole lot more like a Eurospy movie even though it would still lack all those other elements.

Color on its own isn’t essential (there are quite a few very good black-and-white Eurospy movies, mostly from the first half of the Sixties), but like a great score, it sure does a lot to pass over a low-budget film’s shortcomings. Some of the weakest Sixties Eurospy movies are saved by vibrant or, later in the decade, psychedelic colors. It functions the same as exotic scenery, flashy cars and sexy, scanitly-clad women (huge apologies to women for relegating your sex to set dressing, but rich characterization was not a hallmark of Eurospy babe roles. Hey, I’m not making this stuff up, merely analyzing it!): it draws the eye away from the films’ ample shortcomings. The shortcomings in Flame of Stamboul are on full display, with little in the way of distractions–and only one woman!

The action in Flame of Stamboul is what you would expect from a movie of this budget and this period, which is to say not much. Even the cheapest Eurospy movies learned quickly to put the least expensive stuff up front and pinch their pennies for a slam-bang finale. (See especially: Lightning Bolt, which pulls out all the stops for an underwater bas/rocket launch finale you didn’t think it was capable of.) Flame of Stamboul ends not in a lair of any sort, but a room–one of those cheap reusable sets with a table and some chairs and a lamp and little else. When the action comes, it’s in the form of punching and a single gunshot–and that’s all diminished because the one previous action scene was also punches and a single shot. I really don’t know what changed from a technical standpoint between the early Fifties and the early Sixties that suddenly allowed low budget movies to have car chases, but it was a crucial change. Some hot chrome would have added a lot to this film.

Of course complaining about all of its shortcomings (which is intended as analysis, and not just bitching about what really couldn’t be, given the limitations of the budget and the period) neglects the film’s more impressive attributes that I cataloged up front. It really is surprising how many of the familiar Eurospy hallmarks are present in a film of this vintage. It plays like a Eurospy movie that’s been stripped of all of its color and pizzaz. Flame of Stamboul isn’t a bad spy movie and it isn’t a particularly good one either. Unless you’ve got a special affinity for B-pictures of that era, it’s not necessary to seek out. But it IS instructive in studying the elements that will cement the genre into the state that we know and love in the 1960s. It will make you long for Technicolor Jet Age magic–and in its way, with its crude use of an old-school burglary plot as a cover for its new-age espionage shenanigans, it played a small part in delivering that, functioning as a stepping stone between film noir crime movies whose plots happened to concern Communist cells and bona fide spy movies of the Swinging Sixties.
Posted by Tanner at 1:20 AM

I have a soft spot for these earlier espionage movies. I doubt if this one will show up on TCM in Australia though.