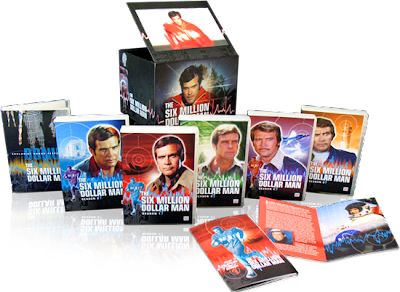 Reader Delmo pointed out in a recent comment that The Six Million Dollar Man (1974-1978) was as much a spy show as a sci-fi one, as bionically-enhanced Colonel Steve Austin (Lee Majors) worked for the top-secret organization OSI (Office of Scientific Investigation).  Another friend of mine had just made the same point recently, saying that the pilot movie (I'm not sure which one he was talking about; apparently there were three) was a much more serious, even gritty, spy story than the TV show ever was.  I'll take their words for it, because I don't think I've ever seen an episode of The Six Million Dollar Man.  Instead, my awareness of the series is reflected through popular culture and parody.  (I know, for example, that Oscar Goldman was Austin's boss from The 40 Year Old Virgin!)  Now I guess I'll have the chance to rectify that gap in my pop culture knowledge because TV Shows On DVD reports that the complete series is coming out on DVD for the first time in Region 1, from Time-Life. Time-Life previously created the feature-laden (but expensive) Complete Series sets for The Man From U.N.C.L.E. and Get Smart, and The Six Million Dollar Man Gets the same lavish treatment - and the same exhorbitant price, at $239.99.  But the extensive features (and possibly the deluxe packaging with 3D lenticular images and a sound chip) just might make it worth that much... and it's still better than paying $6 million, right?  Here are some of the features, from the press release at TV Shows On DVD:


Enhancing the series long-awaited release are countless hours of bonus features, including intimate interviews with the cast and crew, including Lindsay Wagner (Jaime Sommers), executive producer Harve Bennett, and writer Kenneth Johnson. Also featured are a staggering seventeen original featurettes, on everything from "Real Bionics: How Science Fiction Is Becoming Science Fact" and "The Bionic Sound Effects", to "The Search for Bigfoot" and "The Six Million Dollar Man's Best Villains, Best Fights"; the two-part featurette "TV Goes Bionic: The Untold Story of The Six Million Dollar Man" (which goes behind the scenes to explore the series like never before), and several featurettes celebrating the series V.I.P. guest stars such as Lee's then-wife, Farrah Fawcett-Majors (who made four guest appearances), Andre the Giant, Kim Basinger, Sonny Bono, Lou Gossett, Erik Estrada, Stefanie Powers, John Saxon, Cathy Rigby, William Shatner, Suzanne Somers and many more. Additionally, there's audio commentary on six episodes by writer Kenneth Johnson and director Cliff Bole, and an interactive bonus entitled "Bionic Breakdown" that will allow fans the ability to click on Steve Austin's eye, arm or legs to learn more about each one of his bionic enhancements; from night-vision to cauterizing veins to running speeds that exceed 65 miles per hour, "Colonel Austin's" skills and abilities are catalogued here with episode clips as a visual reference.

For now, The Six Million Dollar Man: The Complete Series (a whopping 40-disc set, containing all five seasons, all three pilot movies and all three reunion movies) is only available directly from Time-Life at 6MDM.com.  That's annoying, because it means consumers are hostages to their pricing.  (Although the company does offer occasional coupons, if you search for them.)  In a year or two, after the window of exclusivity is over, I'm sure the complete series and possibly even individual seasons will become available in stores and from the usual online retailers at much more competitive prices.  That's what happened with The Man From U.N.C.L.E. and Get Smart.  In the meantime, be sure to check out the full press release at TV Shows On DVD to read about all the special features.  (There are way more than those mentioned above!) 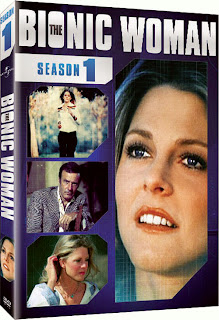 Steve Austin isn't the only bonic person coming to DVD this fall, though.  TV Shows On DVD also recently reported that the 1976 spinoff show The Bionic Woman, starring Lindsay Wagner, will debut on October 19 with The Bionic Woman: Season One.  The 4-disc set from Universal includes all 13 episodes from the first season as well as five crossover episodes of The Six Million Dollar Man, episode commentaries, a gag reel, a photo gallery and the featurette "Bionic Beginnings," featuring an all-new interview with Wagner.  Retail is a much more reasonable $39.98 (though it's available for pre-order right now for just $27.99), but you'll have to shell out again for two more seasons down the road.  Still, much cheaper than Time-Life's Six Million Dollar Man set!
Posted by Tanner at 1:55 PM

They're not wrong. I did a bit on them both a little while ago, but in short, the books were semi-realistic spy novels - the idea being that a bionics (sic) man could infiltrate places a bigger group couldn't get into - and even has Steve Austin's eye as just a camera for taking photos. The pilot movie is slightly spyish, the second movie - Wine, Women and War - is very spyish with Austin inflitrating almost a James Bond villain's island, Solid Gold Kidnapping less so. And then in the series is mostly spy stuff for the first series before slowly becoming sci-fi over time.

Bionic Woman is more of a spy show, but quickly takes on more a sci-fi theme, right down to fembots.

Not only is "Wine, Women and War" more Bond-like, it even features two Bond girls! Thunderball's Luciana Paluzzi is a good/bad girl (and looking not a day older -- or less hot -- since her brush with 007) and Britt Ekland is the damsel in distress, in one of her last credits before leaping to fame with "The Wicker Man" and Bondage in "Man With the Golden Gun."

And yes, that pilot was gritty. Darren McGavin is the original leader of the OSI (no Oscar in this one) and he's got icewater in his veins. He grafts the bionic limbs on Austin against his will and then demands he "pay up" by taking on a mission for the government...a suicide mission and a red herring, to boot. The theory is that if Steve survives, he's the man they want, and if not, what the heck, they'll build another one!

Oscar's great and all, but I'll always wonder how awesome TSMDM could have been if McGavin had stayed on. Of course then we wouldn't have gotten The Night Stalker.

Thanks for mentioning me in the post. The U.N.C.L.E. set may be cheaper but it has yet to be available as individual seasons.

You can buy UNCLE on a "season by season" basis through Amazon's z-shops, but it's just "complete" sets that have been broken up, and not a deal at all if you eventually want the whole series.

Might be the only way I ever bite, though, as I've always heard the show got progressively worse, so bailing out early is an attractive option.