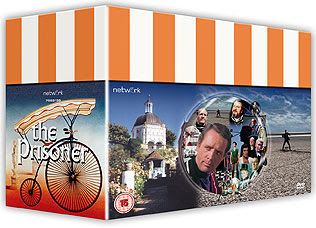 Network has announced yet another UK DVD release of The Prisoner, this time as The Ultimate Set.  In addition to all of the truly wonderful features included on the company's 40h Anniversary Edition, Blu-ray set and current DVD set, The Ultimate Set also includes Network's 3-CD Prisoner soundtrack set and the 2009 remake of the series starring Ian McKellen and Jim Caviezel.  (The latter is also available on its own on DVD and Blu-ray from ITV Studios, and includes all the special features from the American DVD. It's not available on Blu-ray in the United States.)  I suppose the remake is the main selling point, but it doesn't really deserve that honor.  However, I kind of like that it's included, because it's basically found its proper place: as a DVD extra on the real series.  From that standpoint, it's easier to appreciate the remake.  It's a curio that one can watch after watching the Patrick McGoohan series.  It's for completists, and this Ultimate Set is a completist's dream.  While I'm sure most Prisoner fans who want them already own both series and the soundtrack, this is a good way for future fans to pick up everything at once.  The inclusion of the soundtrack music is much more attractive than that of the remake; again, its meticulous archival nature makes it a perfect DVD feature.  The set, packaged in an eyecatching if unweildy box, also includes the booklets originally available with Network's DVD and CD sets (by Andrew Pixley and Eric Mival, respectively).  I'm not sure if it includes the special features associated with the new version of the show, but I would assume so.  Overall, there's no reason to get this if you've already got the stuff it includes, but it's a pretty good archival collection for future generations.  Or Christmas present for this generation, which I'm sure Network's banking on!

Read my original TV review of The Prisoner 2009 remake here.
Read my review of the 2009 Prisoner remake DVD here.
Posted by Tanner at 3:39 PM