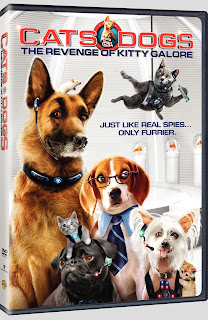 Not that anyone cares, but according to DVD Active, Warner Home Video will release Cats and Dogs: The Revenge of Kitty Galore, this summer's pets-as-spies flop featuring the voice of Roger Moore, on DVD and Blu-ray on November 16.  As usual with Warner titles, the real extras are reserved for the Blu-ray/DVD combo pack.  All you get besides the movie on the regular DVD is a Loony Toons short featuring Wile E. Coyote; the Blu-ray also includes the featurettes "Dog Dishing: Tails from the Bark Side of Hollywood" and "The Best of the Best Cat vs Dog Animated Showdowns" as well as outtakes and a digital copy of the film. You know, in case you want to be able to play Cats and Dogs: The Revenge of Kitty Galore on your telephone.  As you probably do.  Retail on the DVD is $28.95; the Blu-ray/DVD combo goes for $35.99.  For more on Roger Moore's role as a kitty spy boss named Lazenby, click here.
Posted by Tanner at 10:12 AM

Tex
(some movies are only worth a couple bucks, if that)