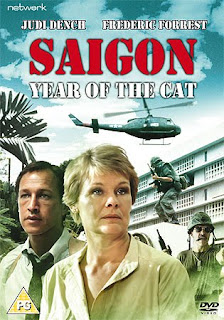 On October 4, Network will release Stephen Frears' 1984 historical spy romance Saigon: Year of the Cat on Region 2 PAL DVD. This BAFTA-nominated film has somehow fallen into the public domain here in America (I think), so there are many shoddy Region 1 versions available and it sometimes turns up on those multi-film collections. (I have one that it's supposed to be on, but in fact it's another movie.) Hopefully Network's version (which I believe marks its UK DVD debut) will finally present a quality transfer. Like the American releases, it's 1.33:1 full-frame, but that's actually the film's original aspect ratio.

Future M Judi Dench stars as an English woman working in Saigon during the chaotic final days of the Vietnam war who falls in love with a CIA analyst played by Frederic Forrest (Permission to Kill). They begin a torrid affair just as Vietcong forces advance on the city forcing a frenzied evacuation.  The script is by acclaimed British playwright David Hare (The Hours, The Young Indiana Jones Chronicles). Fun fact: Frears was at one time attached to direct the first ever spinoff from the James Bond series, Jinx, starring Halle Berry reprising her Die Another Day role with a script from Bond regulars Purvis and Wade. That project fell apart. (Read People's hilarious time capsule of a story on the matter here, which says the project was shelved in favor of Bond 21 starring Pierce Brosnan, set to film in 2005, and also gushes with positive buzz on Berry's upcoming Catwoman.)