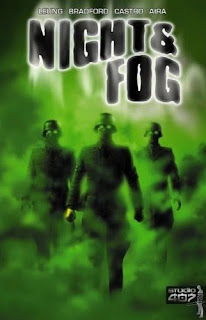 This is last-minute notice, but I'll be signing copies of my comic book, Night & Fog, at Golden Apple Comics in West Hollywood tonight (Wednesday, September 22) from 6-8.  If you're in the LA area, be sure to stop by and say hi!

If you've got no idea what I'm talking about, Night & Fog is an action/horror comic book I co-wrote (under my real name, as Matthew Bradford, not Tanner!) a couple of years ago.  Three issues came out in "floppies" (regular comic books), but the series never properly wrapped up.  (That didn't stop it from being optioned for a film, though, at the end of last year; I'm afraid there's no significant movement to report on on that front at the moment.)  While issue 4 has been available on the iPad for a little while now (and 5 should appear soon), the upcoming trade paperback will mark the first time that the complete mini-series has been printed in a traditional, tangible format.  (Personally, I will never surrender my physical books in favor of downloadable content!)

If you've already pre-ordered the trade paperback on Amazon, you've probably been frustrated by the repeated delays.  However, I'm happy to report that those are all over, and the book will be out for real in November!  (On November 17, in fact, the auspicious 15th anniversary of GoldenEye, which suits me just fine.)  If you haven't pre-ordered it yet, and you're interested in a Hammer Horror meets Aliens tale of monsters and soldiers and dead Nazis and, yes, even a few spies, then I heartily encourage you to either pre-order the book on Amazon (ideally through this link, natch!) or, better still, support your local comic shop by going in and ordering it there.  Tell them it's listed in the current issue of Previews from publisher Studio 407.  And if you happen to work at such a comic shop, then go ahead and order a bunch!  They'll sell like gangbusters!

A limited number of advance copies of the trade will be available at the signing event tonight, and we will also be giving away some free sampler issues.  I'll be there, at Golden Apple, from 6-8PM.  Find more details on the signing on Golden Apple's website, and more on the comic at the Studio 407 website.
Posted by Tanner at 3:38 PM

Congratulations, my friend! I wish I were in Los Angeles to celebrate this!

Oh crap i just read about this now! Sorry to have missed it and will pick up the trade when available!

Do you have the Diamond order code from the Previews catalogue? It's the one that looks something like OCT101234, and is what comic stores use on their order forms — if a customer gives that code to the store, they just enter it on the order without having to look the book up in the catalogue :)

Thanks, guys! And thanks for pointing that out, Antony. It WOULD help to have the order number! I'll add it to the post, but for now here it is: SEP101118.