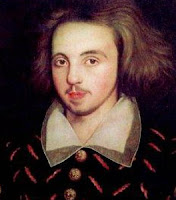 reports that Sam Riley (Control, Brighton Rock) has been tapped to play one of history's most famous celebrity spies--playwright Christopher Marlowe. Michael Elias has adapted Anthony Burgess' novel A Dead Man in Deptford for the screen, and Nick Copus (the Day of the Triffids remake) will direct. Almost-Saint James Purefoy will co-star, along with Ray Winstone (Indiana Jones and the Kingdom of the Crystal Skull, Edge of Darkness), Ed Speleers (Eragon) and Adam Sinclair. Burgess is probably most famous for his novel A Clockwork Orange, though he also wrote an unused early draft for the Bond movie The Spy Who Loved Me, and later introduced some late-90s UK paperback editions of Ian Fleming's 007 novels. A Dead Man in Deptford, his final novel, reinforces his interest in spies.  According to the trade, "the movie will play with the idea that Marlowe, a notorious bar room brawler, was also a royal spy for Elizabeth I [a fairly widely-held idea, abely supported by Charles Nicholl in his Marlowe biography

) and that his death in Deptford at age 29 may have been an assassination ordered by the English Secret Service." I've always been fascinated with the spy angle of Marlowe's career (and Elizabethan espionage in general), though I haven't read that novel.  I'm certainly excited for the movie, though!  Production is scheduled to begin in the spring.
Rupert Everett previously played Marlowe in a memorable cameo in Shakespeare in Love.
Posted by Tanner at 12:15 PM

There was a pretty good historical thriller a few years back called THE INTELLIGENCER which dealt with Marlowe the spy. As I recall, the narrative shifted back and forth with some less interesting modern-day stuff, but the Elizabethan scenes were good.