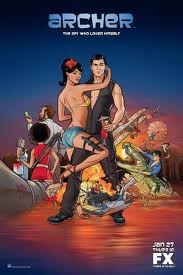 Archer Returns Tonight!
My favorite new spy show of last year returns for a second season on FX tonight, January 27 at 10PM. I saw the season premiere when it screened at Comic-Con last summer, and it was great.  In fact, it might be the best episode yet, and it was an ideal jumping-on point if you've never seen any of Season 1.  (Not that the half-hour animated comedy is really serial or anything.)  My favorite part of Archer is its awesome visual style, which draws from the best design elements of the James Bond series throughout the years.  As with last season, there's some very cool (and very Bondian) promotional artwork associated with the new one, though I can't find a high-res version of the whole poster, just details from it.  (You can, however, download a very large version from the official Archer website, a PDF big enough to print out and make your own wall poster!) Please bear in mind, though, if you're tuning in expecting a reverent spy parody, that Archer is in no way reverent and that (as I've said many times) the humor goes well beyond sending up the spy genre and is very, very crude.  Personally, I love it, but it's admittedly not for all tastes. The DVD of Season One is out now, and you can also catch up by watching entire episodes online on FX's website.

Archer is simply fantastic. Season one was just brilliant right from the very first scene. I just hope that season two will be as inventive and that Stirling continues to be the biggest jerk on TV that you can't help loving!