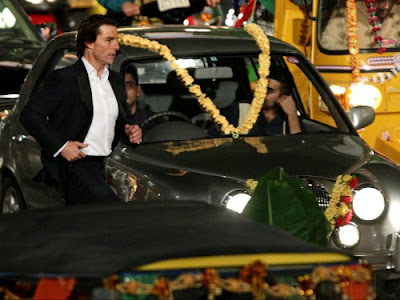 Speaking of Mission: Impossible - Ghost Protocol (which we were earlier today), some more set photos have turned up! I don't know about you, but I love spy movies with carnivals in them. I think Thunderball started the trend with the Junkanoo, but the tradition lived on healthily not only in Eurospy imitators (any spy movie that takes place in Rio takes place during Carnival!), but also in the Bond series itself (On Her Majesty's Secret Service, Moonraker, even the New Orleans funeral in Live and Let Die).  And now the Tom Cruise Mission: Impossible film series gets its first street carnival, judging from these on-set pictures at Italian movie site Film.it (via Dark Horizons). Filming is taking place in Vancouver, but it's unclear at this time whether or not Vancouver is playing itself or not. I'm not sure what carnival this is, but a little Googling reveals that Vancouver has a Winter Solstice Festival celebrating the return of the light in December. That timing would seem to work out. Either way, looks like a cool scene.  I wonder if its an IMAX one?
Posted by Tanner at 6:32 PM