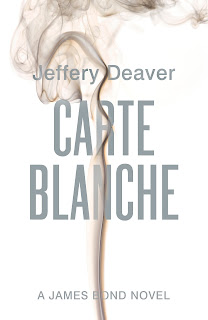 Jeffery Deaver revealed the title and UK cover art (as well as the car) for his forthcoming James Bond continuation novel today in Dubai and on his website.  At the Emirates Airline Festival of Literature in Dubai, Deaver unveiled this cover and the title Carte Blanche. A corresponding press release doesn't give away many details about the plot (other than that part of the story takes place in the UAE, which we already knew), but it does answer another burning question that's sparked intense debate in the Bond fan community of late: what car will 007 drive in this modern day-set novel? "Carte Blanche also features Fleming's favourite car – a Bentley. Historically, Bond owned three Bentley cars in the course of the fourteen original novels written by Ian Fleming and, bringing the plot completely up to date, Bond drives a Bentley Continental GT in the new book." Sounds good to me! (Though I'm not sure about that bit about Bentley being Fleming's own favorite car.  While it's true that his character favored it, I'm pretty sure Fleming himself drove Thunderbirds and Avantis in the days when he was chronicling Bond's adventures. But that's nitpicking.) I love the looks of the cars Bentley has been making of late (I'd hoped we might see one in Casino Royale, but the Aston Martin DBS was a more than adequate substitute), and the Continental GT is no exception. See for yourself at Bentley's website. 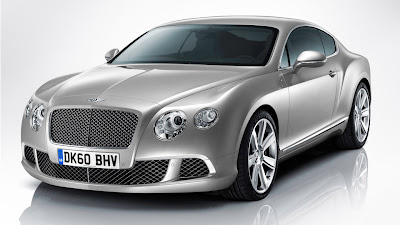 That's not much to go on, but regular readers will know well that I never shy away from flounting the adage and judging books by their covers. So what do I think of the title and cover?  Well, the first thing I thought looking at it was, "Cate Blanchett? What does she have to do with this?"  That was just my first thought looking at those words in that title treatment.  I know, I'm weird.  (And I spent years working on the Lord of the Rings movies where her's was a name that popped up a lot.)  Anyway, as for the title, I like it.  It doesn't have quite the ring of Devil May Care, but it still sounds Bondian and I have every confidence this novel will outshine that disappointment.  One good indicator is the fact that IFP aren't pulling that offensive "writing as Ian Fleming" nonsense that they did with Sebastian Faulkes. The cover image (for the Hodder and Stroughton UK edition) is stark and suitably spyish (shades of Mission: Impossible) and modern looking, all of which are good things.  It's not ideal (I'm not quite sure what it is: is it a fuse or just a plume of smoke?), but it looks good.  I'm surprised they resisted making the curves in the smoke into a woman's body ala the flower on the UK Devil May Care cover or the flames on The World Is Not Enough's teaser poster, but I suppose it looks more contemporary this way. 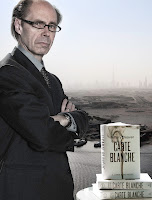 A photo accompanying the press release depicts Deaver posing with some mock-ups of the book (at least I assume they're mock-ups!), and honing in on that detail, I like the overall look. Assuming it's about the same size as the classic UK firsts of Fleming and Gardner, the whole design seems very appropriate. Hodder and Stroughton have also set up a mini-site dedicated to the novel, complete with a countdown to its release and a cool little 3D animation of the book itself. Check it out at 007carteblanche.co.uk. 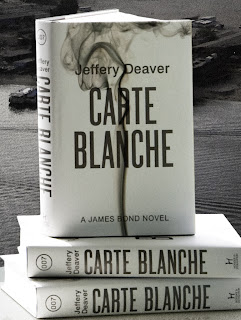 The Hodder and Stroughton edition of Carte Blanche comes out two days in advance of Ian Fleming's birthday on May 26, 2011. The American edition, published by Simon and Schuster, follows a few weeks later on June 14. This book is one of the spy events I'm most looking forward to this year, which is itself the subject of a follow-up post to my Best of 2010 round-up that I've been working on since New Year's Day and hope to have up soon.
Posted by Tanner at 10:45 PM

That's funny, the first thing I thought when I saw this was, "Thank god they didn't try to shape the smoke like a woman."

This is definitely a minimalist cover, but I like it. It certainly runs circles around the hideous UK cover for Devil May Care. Here's hoping the same holds true for the content.

Great Article. it’s Really Helpful and Enjoyable Post for Every Blogger. Thank you very much for Sharing with us.
http://mordo-crosswords-solution.com