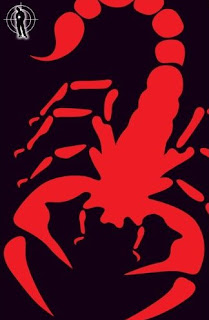 Here's the second Anthony Horowitz news item of the day. I'm a little behind on this, but the cover artwork for the final Alex Rider novel, Scorpia Rising, popped up last month on the official Alex Rider website and on Amazon.com and Amazon.co.uk.  As usual, the British artwork (left) is better (though I don't think it's final), and the American one (right) is too busy.  Writer Anthony Horowitz swears up and down that Scorpia Rising really is the end of his hugely popular Young Adult teen spy series–and a very definitive end at that.  Spy fans can discover exactly what he means by that this March.  Scorpia Rising comes out in hardcover in the United States from Philomel on March 22, and (surprisingly) a week later in the UK when Walker Books releases the paperback original on March 31. Previously, these books have debuted first in Britain.  It's also curious that this one's back to being a paperback original in the UK, like the early books, since the last one, Crocodile Tears (review here), came out in hardcover.  Here's the intriguing UK description for Scorpia Rising: 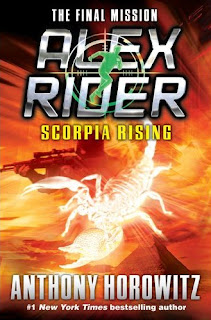 This gripping final mission brings together Alex Rider's old enemies to frame the teenage superspy in an unstoppable plot of revenge, from which he can never return. Pursued from Europe to North Africa and Cairo's city of the dead - this is the twistiest and most deadly plot of any Alex Rider mission yet, and will reveal Smithers' ultimate gadget and see the shock death of a major character.

The American description is less revealing:


Scorpia has dogged Alex Rider for most of his life. They killed his parents, they did their best to con Alex into turning traitor, and they just keep coming back with more power. Now the world's most dangerous terrorist organization is playing with fire in the world's most combustible land: the Middle East. No one knows Scorpia like Alex. And no one knows how best to get to Alex like Scorpia. Until now.


The chases have never been more intense, the fights more treacherous, or the risks so perilous to mankind. And this time, Alex won't get away.

Horowitz himself revealed far more about the book in his interview with NPR last year.  Read all about that here. If you pre-order now, you can save 50% on the British version of Scorpia Rising (making it a dirt-cheap £3.49) and nearly as much on the American one.
Posted by Tanner at 6:09 PM