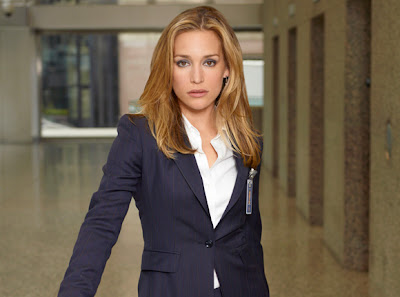 Actress Piper Perabo Injured on USA's Covert Affairs Set
Contact Music reports today that actress Piper Perabo (nominated for a Golden Globe for her performance in the freshman USA spy series Covert Affairs) broke her leg during a fight scene on the set of her show.  Even though the story broke today, though, it sounds like it might be old news.  According to Perabo, the injury occurred while shooting the season finale.  Since the show doesn't return until the summer, it seems unlikely that they'd already be shooting next season's finale, so this incident probably happened as they wrapped the last one, and the story probably just broke amidst her Golden Globes publicity.  Perabo hopes the mishap won't mean that she doesn't get to do her own fights during the next season (presumably meaning the second one).  "One of the things I like about the show," she tells the website, "is they really take the action seriously and let me do it. When it happened, one of the first things I said to our line producer was, 'Do not take me out of the action of the show.'" As I recently posted, Covert Affairs (review here) was one of my favorite new spy shows of 2010, and I'm very much looking forward to the next season.
Posted by Tanner at 3:41 AM