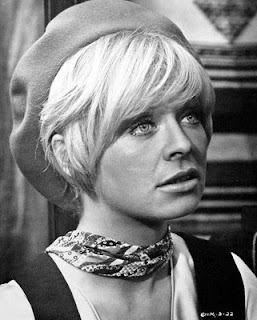 The AP reports that Susannah York, the vivacious British actress who epitomized the Swinging Sixties, has passed away from cancer at 72.  Since spy movies were a fixture of that decade and its Swingingness, it's unsurprising that she starred in quite a few.  My favorite of York's forays into the genre was Kaleidoscope, which also starred Warren Beatty and Clive Revill.  While technically more of a caper movie (the jet-setting, European-set variety that's just one small degree removed from the spy genre anyway), Kaleidoscope actually borrows so much of its plot from Ian Fleming's novel Casino Royale that some Bond fans consider it an unofficial adaptation.  It certainly uses as many elements as any of the three legitimate versions, and adds as many of its own as either of the features as well.  But the best thing it has going for it is that awesome Sixties vibe, embodied as much by York's irrepressible, mini-skirted character as by the costume and set design. That same year, she made a similar (and equally entertaining) Euro-caper, Duffy, opposite James Coburn. York also lent her talents to Sebastian (1968), playing a sassy, sexy codebreaker who wins the heart of boss Dirk Bogarde, and co-starred twice opposite Roger Moore, in Peter Hunt's South African mining adventure Gold (1974) and the international-arms-dealing-romantic-comedy (an odd genre curiously neglected over the years) That Lucky Touch (1975).  I haven't seen the latter, though Moore himself deemed it awful enough to go out of his way making excuses for it in his autobiography. Still, with Moore and York it can't be that bad, can it?  Moore wasn't her only Bondian co-star, either; she acted with Sean Connery in a decidedly non-spy role, a BBC version of "The Crucible."

Despite all these spy roles, York will probably be better remembered for movies like Tom Jones, A Man For All Seasons, The Killing of Sister George, Superman and an Oscar-nominated turn in They Shoot Horses, Don't They? I'll always think of her, though, as the spirit of the Swinging Sixties–an era trapped in time but possibly better preserved on film than any other, thanks in part to York's performances.
Posted by Tanner at 4:20 PM

A beautiful lady to the end, and a great actress. This was a nice tribute.