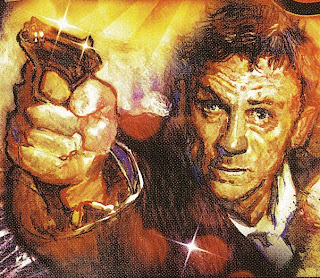 James Bond is Back in Action!

I've deliberately refrained from reporting any of the myriad rumors that have swirled around the next James Bond movie since EON Productions officially put it on hold last year until we heard an official announcement from EON.  And today, we have it!  As promised at the end of Quantum of Solace (as always), James Bond will return!  And so will Daniel Craig, fortunately.  (Some had feared that the long delay imposed by MGM's financial woes might have relegated him to a two-time Bond status, as happened to poor Timothy Dalton in the Nineties.) According to Deadline, EON's Michael G. Wilson and Barbara Broccoli issued a joint statement today with Gary Barber and Roger Birnbaum, the new Co-Chairmen and CEOs of MGM revealing that Bond 23 will now proceed with Craig and director Sam Mendes (who was announced last spring but only officially attached as a "creative consultant" so as not to tie the franchise to the sinking MGM anymore than it already was) still attached.  The long production hiatus did unfortunately cost the film screenwriter Peter Morgan (whose involvement I was quite excited about), but instead the estimable John Logan will join Bond mainstays Neil Purvis and Robert Wade on scripting duties.  Northwestern alumnus Logan (I have to give a shout out to the alma mater!) has written plenty of high-profile movies, like Gladiator, Sweeny Todd, Star Trek: Nemesis, and the upcoming Martin Scorsese movie Hugo Cabret.

Filming will begin later this year for a release date of November 9, 2012.  The trade blog reports that casting may already be underway, which would gel with the persistent rumors of late that regular Mendes collaborator Simon Russell Beale (who portrayed George Smiley in a series of BBC radioplays based on all of John Le Carré's books about the character) will be a part of the film.

Still unclear is who will distribute the next Bond film.  My understanding is that the restructured MGM will function only as a production entity, seeking distribution partners for each of its films.  (It was recently announced that Warner Bros. will take over international distribution on MGM's other high-profile project also long delayed by the bankruptcy proceedings, The Hobbit.)  Sony would seem like the obvious choice, having partnered with MGM on both previous Daniel Craig Bond films.  Barbara Broccoli and Michael G. Wilson are said to have enjoyed their working relationship with Sony's Amy Pascal.  However, Deadline speculates that it could be anyone.  Fox is also a logical prospect, as they distribute the Bond DVDs.  But even Warner Bros. or Paramount might make a play for the franchise.  Still, now that the ball is officially rolling, I expect further announcements about casting and distributors can't be too far off.  Stay tuned!
Posted by Tanner at 1:34 PM

I'm glad to see Bond is alive and well. I still am impressed every time I watch "Casino Royale". Along with "Ronin" and the Bourne Films, I put those films as some of the best spy films recently.

I was really hoping for someone other than Daniel Craig. I'm afraid I won't be watching it if he's in it.