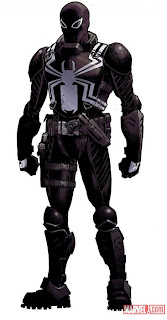 In a sure sign that the spy genre has reached its greatest heights since the 1960s, spies are once again invading all corners of popular culture. In comics, obviously espionage is nothing new to the Marvel Universe. This is, after all, the publisher that turned its popular war hero Sgt. Fury into superspy Nick Fury, Agent of S.H.I.E.L.D. in the heyday of the Sixties spy boom. Nick Fury and S.H.I.E.L.D. have remained integral to the Marvel Universe ever since, and become more so than ever in the last decade. But now the most popular Spider-man villain is being reinvented as a secret agent.

Personally, I've never seen the appeal of Venom. I prefer the classic Spidey antagonists created by Stan Lee and Steve Ditko back in the Sixties. (I've always been partial to The Vulture and The Lizard.) But I'm in the vast minority among my generation. Most comic readers who came of age in the Eighties and Nineties seem to love Todd McFarlane's big toothy monster design. However, I have to admit I am slightly intrigued by Marvel's latest direction for the character. According to Comic Shop News and Newsarama, the new take devised by writers Dan Slott and Rick Remender and Walking Dead artist Tony Moore envisions Venom as a Bond- or Bourne-like secret agent. Of course, this being a comic book (a medium that fetishizes paramilitary gear even more than movies, as evidenced by the famous jumpsuit Steranko gave Nick Fury), he's really more of a Black Ops soldier-boy than a spy-guy (in design, anyway), but Remender still promises lots of espionage and intrigue.

A person becomes the monstrous Venom when he dons a black alien symbiote suite that imbues him with strength and powers--but also tugs at his psyche, making him crazy after prolonged exposure. Rememder is mum on who exactly will be wearing the suit, but he's doing it now for the U.S. government. (Not S.H.I.E.L.D., Marvel's former go-to spy agency.) "In terms of a character who could 007 it up," he told Newsarama, "Venom could one day be infiltrating Utopia to steal some secrets from an evil mutant who lives there. And the next day, he could be gallivanting as a tuxedo-adorned rico suave, hitting up a Casino Royale-type situation in Latveria. He’s going to hop all over the place, and do 007 business wearing the Venom symbiote, and the whole time in a struggle with the symbiote to make sure it doesn’t take control of him, and turn him into the 'real' Venom."

He elaborated further to CSN: "It's James Bond-style worldwide adventuring with the high stakes espionage, intrigue, fast action and an opening mission that holds the stability of the world in the balance." Okay, that all sounds good to me. But then he adds, "The tone merges the same brand of ferocious hardcore violence fans of Venom would expect with the international high-adventure of The Bourne Identity, globetrotting from bleak Eastern European war zones into exotic Marvel Universe locations like the Savage Land." Eh, maybe it's not for me. I've got nothing against "hardcover voilence" in plenty of situations, but it's never a selling point for me, either. And that phrasing kind of sums up why Venom has never appealed to me before.

Still, I do like that Black Ops Spidey suit Moore has designed, and this is an intriguing angle and part of an equally intriguing trend. Over the past decade and particularly in the last few years, Marvel has been retooling almost all of their characters to be a little more spy than classic superhero. Ed Brubaker started it with his brilliant techno-thriller take on Captain America, and lately we've seen Spider Woman and even The Avengers (as The Secret Avengers–no relation whatsoever to the real Avengers of classic spy TV) reimagined as secret agent comics. On top of all that, characters who have always been spies to begin with like Fury and Black Widow have gotten their own series again recently. Even in the Sixties, spy-mania was never this all-encompassing!

The new Venom debuts this March in Amazing Spider-Man #654.1 by Slott, then spins off into his own series by Remender and Moore.
Posted by Tanner at 4:44 PM