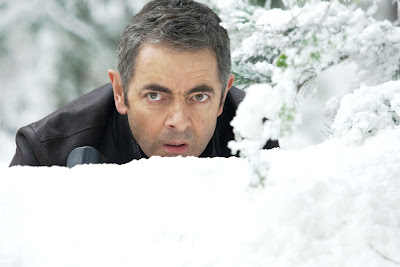 Looks like I missed this one a few weeks ago!  Ace Showbiz has the first picture I've seen from the Rowan Atkinson spy parody sequel Johnny English Reborn.  So... there's snow.  Always a good thing in a spy movie–comedy or otherwise!  Sadly the picture doesn't offer us any glimpses of the impressive duo of previously announced "English Girls" Rosamund Pike and Gillian Anderson.  The website also has a synopsis that sounds official offering some plot details I hadn't read before:


In the years since MI-7's top spy vanished off the grid, he has been honing his unique skills in a remote region of Asia. But when his agency superiors learn of an attempt against the Chinese premier's life, they must hunt down the highly unorthodox agent. Now that the world needs him once again, Johnny English is back in action. With one shot at redemption, he must employ the latest in hi-tech gadgets to unravel a web of conspiracy that runs throughout the KGB, CIA and even MI-7.

Johnny English Reborn opens September 16, 2011 in the UK, which means Brits will have to choose between two very diffent spy movies that weekend! I think that's the same date that Tinker, Tailor, Soldier, Spy opens.
Posted by Tanner at 6:24 PM