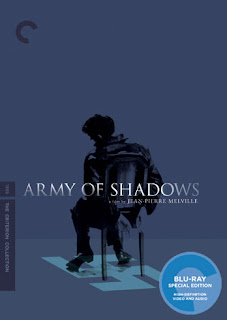 I don't think there are any new spy DVDs out this week, and there's only one new spy Blu-ray–one that's already been available on DVD for a while.  But whatever format you watch it on, it's an undeniable classic! The Criterion release of Jean-Pierre Melville's 1969 wartime spy classic Army of Shadows, drawn from the director's own real-life experiences in the French resistance, gets the Blu-ray treatment this week with all the same excellent special features as the DVD edition, including an engrossing commentary with film historian Ginette Vincendeau, new interviews withe the editor and cinematographer, and behind-the-scenes material culled from French TV at the time of the film's production. Retail is a steep $39.99, but of course you can find it for cheaper than that. The new Blu-ray is actually cheaper on Amazon right now than the DVD, at just $27.99. 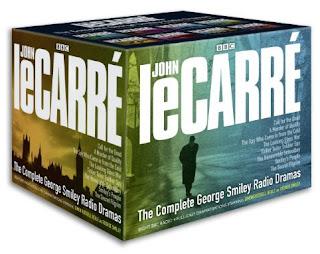 Also out today from AudioGO Ltd., is a cool-looking box set collection of all of BBC Radio 4's Smiley radio dramas first broadcast in 2009, The Collected George Smiley Radio Dramas: Eight BBC Full-Cast Productions Starring Simon Russell Beale.  The well-received radioplays star Simon Russell Beale (who's supposedly up for a role in the next Bond movie) as John Le Carré's most famous literary creation, unassuming spymaster George Smiley.  The box set includes adaptations of every single novel the character appears in–even when he's not the lead: "Call For the Dead," "A Murder of Quality," "The Spy Who Came in From the Cold," "The Looking Glass War," the epic "Karla Trilogy" including "Tinker, Tailor, Soldier, Spy" (possibly my favorite spy novel of all time, of which I'm always keen to see/hear a new adaptation), "The Honourable Schoolboy" and "Smiley's People," and the epilogue to Smiley's career, "The Secret Pilgrim."  All that adds up to 2.8 pounds and over 20 hours of grim and gritty espionage and intrigue!  Sounds worth the $139.95 list price, though Amazon currently has it at a substantial discount for just $88.17.
Posted by Tanner at 10:13 PM

Army of Shadows is one of my all-time favorite films, much less spy films. Aside from one misstep where Gerbier's prison escape feels too much like a dream sequence, the whole film is deeply emotionally engrossing.

Early on there's a scene with a traitor that makes me tear up and cover my mouth. The closing scene with Mathilde does the same.