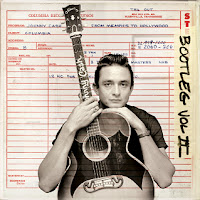 According to Johnny Cash's official website, the forthcoming Cash archival album From Memphis to Hollywood: Bootleg Vol. 2 (due out February 22 from Sony) will feature the first ever official U.S. release of Cash's attempt at a title song for the 1965 James Bond film Thunderball.  The idea of Johnny Cash singing a Bond theme seemed so appallingly incongruous to me that for years I refused to believe that was what it was actually for. Not listening to the lyrics very closely, I thought it was one of Cash's many train songs with a coincidental title.  Then Armstrong at Mister 8 convinced me otherwise* when he took a look at the song last year, and linked to someone's industrious marriage of Cash's song with Maurice Binder's Thunderball title sequence on YouTube.  Clearly, it never would have worked!  But it is cool that Johnny Cash recorded a prospective Bond theme.  Bond completists can buy the album (and probably the track on its own) next month, but for Cash fans like myself there are plenty of other reasons to buy it besides this throwaway ditty.

*It's very hard to find any concrete information on the web as to how this recording came to be. Some sites assert that it was commissioned by the film's producers, but that seems unlikely to me. It seems more likely that Cash or his people decided to submit it, unsolicited, in hopes of exposure in a sure-fire, world-wide hit movie, as Alice Cooper, Pulp and others would do in the future. Thanks to John Cork for pointing me toward one of the few Cash biographies to address the song, Stephen Miller's Johnny Cash: The Life of an American Icon. Miller doesn't seem to know how Cash became associated with a Thunderball song, either, but he does confirm that the singer's intention was for this to be the movie's theme.
Posted by Tanner at 6:27 PM