First Look at Benedict Cumberbatch in Tinker, Tailor, Soldier, Spy
Luckily for spy fans, the British paparazzi have been avidly snapping away as film rolls on Tomas Alfredson's new film adaptation of  John Le Carré's classic Cold War spy tale Tinker, Tailor, Soldier, Spy.  Hot on the heels of those behind-the-scenes pictures revealing Tom Hardy's Seventies look as scalphunter Ricki Tarr, The Daily Mail gives us our first glimpse at Sherlock star Benedict Cumberbatch as Peter Guillam, right-hand man to frumpy-but-brilliant spymaster George Smiley (Gary Oldman).  I love it!  With his straightened hair dyed blond (or is it a wig?), he looks very Seventies (given the movie's Cold War period setting) and very much like I picture Guillam.  (Well, except for the puffy outer coat and the banana, but I assume those will disappear when the cameras roll.) The tabloid also provides our first look at Roger Lloyd-Pack as (presumably) Control.  Like Oldman, he looks a lot like his counterpart in the 1979 BBC miniseries. 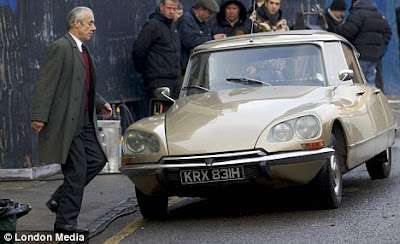 In a possible bit of casting news on this film, the IMDb weirdly lists a Russian, Katrina Vasilieva, as playing the very, very English Anne Smiley, philandering wife of Oldman's protagonist. Hm.
Posted by Tanner at 9:00 PM

Various sources across the internet have indicated that John Hurt is playing Control in this production.