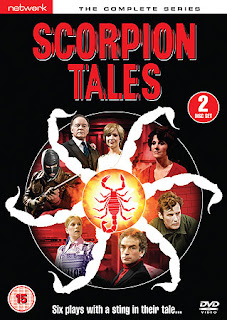 The most memorable part of Scorpion Tales, a Seventies ATV anthology series, is its very cool (if disgusting) opening title sequence created by Alistair McMurdo and accompanied by loud, funky, very Seventies theme music by Cyril Ornadel. We’re treated to garish graphics as two scorpions fight in extreme close-ups in front of a flame. I’m not really sure what the fire and the scorpions have to do with each other, and even the reason for the scorpions seems tenuous. Supposedly each standalone hourlong episode ends with a twist like a scorpion’s sting, but if you ask me the title was probably just an excuse for this title sequence–which is undeniably cool.

The main problem, of course, inherent in a show whose sole purpose is to have a twist ending is that the audience will be looking for the twist, which necessitates a twist on the expected twist... but then we’re looking for and even expecting that, too, and if it doesn’t come, we’re disappointed. Some of these Scorpion Tales succeed in their twists and others don’t. The best ones hinge on a really meaty performance that lets an actor of some repute really chew the scenery, as Trevor Howard does with great aplomb in “Easterman” or Susan Engel (and to a lesser extent Anthony Bate) in the intense “Crimes of Persuasion.” Being a huge fan of his work in Raiders of the Lost Ark but knowing him from little else, I was hoping such an opportunity would be afforded to Paul Freeman (Belloq) in the creepy tale of a boy and his demonic book, “The Great Albert,” but sadly it’s not. “Killing” doesn’t really feature such a performance either, but it’s still entertaining as an early look at the Internet as a contemporary (and not futuristic) plot device, focusing on cyber-trading and cyber-crime and even hints of cyber-sex.

Of course espionage is to be expected in any series of this ilk and vintage, and sure enough, it’s here. “Truth or Consequence” is the only out-and-out spy tale, though, and it’s a story we’ve seen done much better many times. David Robb (The Sandbaggers) plays Lt. James White, a Royal Navy pilot who volunteers (or has he been put up to it?) for a special training course in resisting interrogation. On the morning he’s supposed to leave, his very attractive wife (the alluring Rosie Kerslake), waylays him a bit in a subtle yet surprisingly risque (for Seventies television, anyway) bedroom scene. He doesn’t take the bait, however, and soon he’s on the road... but his car breaks down. A mechanic informs him that someone put sugar in the gas tank, but it still doesn’t occur to him that anything’s amiss. Luckily, a stranger in a pub happens to be going the same direction and offers him a ride, which he accepts.

When James arrives at the training facility, he’s quite late and he’s bawled out for allowing a civilian to know its location by allowing the good Samaritan to drop him off at its door. Little things are amiss in his bedroom, and the training seems to start right away when various officers take on the roles of good cop and bad cop as they welcome him. The questions, however, are quite pointed. Who was the man who gave him a lift? Were the secret documents in James’s possession ever out of his sight? If they weren’t, how did his suitcase end up rearranged? He’s subjected to various methods of extreme interrogation that will be well familiar to viewers of Sixties ITC adventure shows, since every one of them (most successfully Man In A Suitcase) featured at least one episode in which the hero was captured and subjected to the same techniques–and one of the best (The Prisoner) made a whole show out of it.

The line of questioning becomes increasingly personal, and it finally dawns on James that this may not be a training course after all. The good Samaritan who drove him there is known to the Security Services. Was James in league with him all along? What about his wife? His superior officer? Soon even James himself isn’t sure of the truth anymore. There’s a lot of build-up to a twist and a lot of false ones along the way (that the audience is generally in on), but ultimately Brian Phelan’s script doesn’t deliver a satisfying ending, or have anything much fresh to say dramatically. This whole sort of story was done better on all those ITC shows the previous decade–and done definitively on The Prisoner.

Espionage and international terrorism lurk only in the background of “Crimes of Persuasion,” but it proves to be a much better hour of television. Whereas “Truth and Consequences” had exteriors and multiple locations, “Crimes of Persuasion” is much more stage-like, mostly taking place in one apartment. Anthony Bate (Tinker, Tailor, Soldier, Spy, Game, Set and Match) plays an MP who favors restoring the death penalty for acts of terrorism. Susan Engel (Inspector Clouseau) plays his mistress, in whose arms (and whose flat, which he pays for) he takes solace every Friday night. The ensuing drama is primarily a two-hander between the two of them, affording each some juicy dramatic monologues. It starts as a domestic drama but goes in all sorts of directions you won’t expect and defies categorization in any specific genre... and unfortunately I dare not reveal too much more about it because it’s so successful at its (multiple) stings, which are sort of like those of a scorpion... I guess.

Spy fans with a penchant for Seventies British television drama will probably want to seek this series out for “Truth and Consequences,” but that episode isn’t really worth it. If you do manage to get your hands on Network’s new DVD, though, make sure you watch some of the other episodes like the police drama “Easterman” or the devious domestic drama gone amuck “Crimes of Persuasion.” They offer far less espionage but far more bite. Or sting. Or whatever.