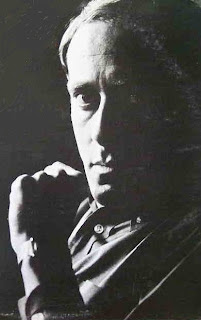 There are certain obituaries that I've dreaded having to write ever since starting this blog, and making the decision to pay tribute to fallen heroes of screen spydom.  This is one of them.  Five time Academy Award-winning composer John Barry, the man who almost single-handedly defined the sound of the whole genre this blog is devoted to, has died of a heart attack at the age of 77, reports Reuters.  Current James Bond composer and Barry acolyte David Arnold revealed the sad news in a somber post on his Twitter feed this morning. He later told BBC Radio, "I think James Bond would have been far less cool without John Barry holding his hand," and he's absolutely right.

Although he didn't begin scoring the Bond films until the second one, From Russia With Love, Barry was certainly involved with Dr. No, adding so much to Monty Norman's James Bond Theme in his arrangement that it's been suggested he deserved a writing credit.* But even if you put the famous theme aside, it's Barry who shaped the soundscape associated with 007, and with the spy genre at large.  His role in creating the screen version of James Bond simply cannot be overstated.  I'd rate John Barry an equal collaborator with Terrence Young, Cubby Broccoli, Harry Saltzman, Ken Adam and Sean Connery in defining 007 for cinema audiences. For me, the music in those Sixties Bond films played as large a role in making me a life-long fan as the cars, the gadgets and the girls.  Apologies and credit where it's due to Miles Davis, but Barry's music was the Sound of Cool.

It's impossible for me to even imagine 007's greatest cinematic moments without John Barry's distinctive score music accompanying them. The ski chase in On Her Majesty's Secret Service (featuring my favorite Barry Bond theme) comes instantly to mind, but the same can be said of the climactic underwater battle in Thunderball, Goldfinger's dawn raid on Fort Knox, SPECTRE's capsule-swallowing spaceship and Moonraker's thrilling river chase (a terrific setpiece too often overlooked because it comes in a less than terrific movie), not to mention countless iconic Maurice Binder title sequences unspooling to Barry's many equally iconic theme songs. Simply put, the Bond of the movies would be nothing without his soundtrack.

The other day, BBC America was playing Thunderball and I'd hit upon it while channel surfing, which of course meant I stayed on it, despite having the film in commercial-free versions on Blu-ray and who knows how many different DVD releases in my apartment. That's just the way it is. If you're reading this blog, then you know! Anyway, I was in the kitchen, making dinner, and couldn't see the screen. But I could hear the music, and I knew exactly what was happening in that big underwater battle. I smiled to myself as the movie played out in my mind, conjured by nothing more than John Barry's thrilling, distinctive chords.  Even if that music had never been attached to any film print, it would have told a story as exciting as anything that ever sprang from the mind of Ian Fleming. Barry's music works beautifully in the movie, in conjunction with Young's direction and Ted Moore's cinematography and John Stears' amazing visual effects, but it also works just as brilliantly on its own. To me, that is the mark of a master film composer. (Indeed, one of my favorite Barry records is a non-film album, The Beyondness of Things,** which tells a million stories all its own.)

John Barry's spy career, of course, went well beyond Bond--and his career at large went well beyond spies. As I recently noted while discussing John Powell's music for Fair Game, Barry defined the sound of spying at both ends of the spectrum in the Sixties: the action and adventure of 007, and the moody, introspective jazz of The IPCRESS File, "the thinking man's Goldfinger." Harry Palmer's theme, "A Man Alone," screams SPY just as loudly as the blaring trumpets of "Goldfinger," but in such a different way. As Barry explored new territory within the Bond series (such as perfecting lounge-core in Diamonds Are Forever or introducing electronica into spy music in The Living Daylights a full decade before it became de rigeur), he continued pushing the envelope of the more serious side of the genre in scores like The Quiller Memorandum or one of his final film scores, Enigma. These scores were as identifiably individual from each other as "007" is from "The Persuaders!" (another favorite Barry spy theme of mine; oh how I love it!), but they're all very clearly spy.  Honestly, I can't think of another composer who so single-handedly shaped an entire genre.  (Sure, John Williams re-wrote the book on adventure in the late Seventies, but he was building on a rich musical history that John Barry didn't have to rely on in the espionage genre. Sixties spy movies were an entirely different breed from those that had come before them, and so was their music.)

And of course Barry's career wasn't limited to spy themes.  I honestly can't decide what I'll put on for my drive in to work tomorrow morning to commemorate the great man's passing.  It could just as easily be "John Dunbar's Theme" from Dances With Wolves or the sweeping love theme from Out of Africa or the discordantly contemplative jazz of Richard Lester's Swinging London romp The Knack and How to Get It. Or even Starcrash, which I just rewatched last weekend. I've had Barry's theme stuck in my head ever since, a theme so majestic that it elevates every campy, low-budget special effect  in the movie to the level the director clearly saw in his own head.  John Barry dabbled in every genre there is, and in doing so created at least a few masterpieces in every one of those genres.  He was a titan, as attested to by his five Oscars.

This being a spy blog, however, I have to come back to that genre that Barry affected more than any other.  He really did create the sound of spy music.  In fact, I can't think of any other single person who made quite so large a mark across the entire genre.  Sure, Ian Fleming and John Le Carre both defined their respective niches, and their influence is undeniable.  But they never ventured out of their clearly marked corners of the genre.  Barry, on the other hand, straddled the entire genre.  Without John Barry, the spy genre as we know it would not exist.  I'm incredibly saddened by his death, and by the fact that I can no longer hold out that hope I always clung to that the great man would one day return for one last Bond score.  (I love David Arnold's work, but I'd bet anything he, too, secretly pined for one last Barry score!)  But while that will never happen, never has a legacy been more assured.  Barry, in fact, enjoyed the rare opportunity to witness his legacy in his own lifetime.  When someone wanted a quick musical shorthand for "spy," they always went for Barry-esque horns.  Whether it was spoofs, like the Austin Powers movies, or loving homages, like Michael Giacchino's fantastically Barryesque Incredibles score, or even mainstream pop music (I don't think it's an exaggeration to say that the entire late Nineties musical genre known as trip-hop was inspired by Barry!), Barry's influence was in plain sight.  And it always will be, for as long as the genre lives on.

Rest in peace, John Barry. All spy fans and all music fans owe you a tremendous debt of gratitude.

*I think it's clear listening to earlier pieces by both composers that the theme as we know it is the result of a perfect collaboration, even if the two didn't work together directly and the authorship has been the source of debate too bitter to go into in a memorial post.

**Yes, I'm aware much of this music began its life as a rejected score, but it took on a whole new life of its own as a standalone work.
Posted by Tanner at 3:13 AM

His spy film scores is synonymous with the sixties. The Bonds, Ipcress and Quiller are all wonderful scores.

I also am very fond of his historical film scores:
Lion in Winter
Mary, Queen of Scots
The Last Valley

Along with Elmer Bernstein and Jerry Goldsmith, we have lost a wonderful generation of great film composers.

I will surprise nobody that I do a lot of writing to Barry's music.

Let's not forget his music for Zulu and Raise the Titanic (very average film - but Barry's sweeping score is fantastic).

Yes, all of those are great scores. Even when the movie wasn't so great, like Raise the Titanic or King Kong, the music was. Nearly every one of Barry's score was a classic. Man, I can't believe he's gone.

I've been listening mainly to Moviola today, since it presents selections from a lot of his sadder scores--and even puts a meloncholy spin on those that weren't.

A very nice post, Tanner. I think we all feel the same way about Barry's contribution to the films. The music is just so evocative and rich, I couldn't imagine the movies without them. The soundtracks have a special sound that will never be duplicated, due to factors both technical and personal. I guess that makes Barry's contributions even more of a treasure.

For so long, it seemed that the classic Bond era was something from 20-odd years ago, something just around the bend of history, with all the contributors and cast middle-aged, active, and telling the tales. Somehow, 20-years-ago turned into 50-years-ago.

I'll be spinning On Her Majesty's Secret Service (and Thunderball) tonight in honor of a major player in the story of James Bond.

THANK YOU FOR DOING HIM JUSTICE!!!

He writes about how he was so honored to present the Academy Award to him for Dances With Wolves.