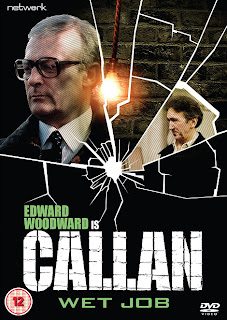 The 1981 Callan reunion telefilm "Wet Job" is finally headed to DVD! It didn't get included as a bonus feature in Network's Callan: The Colour Years, but this March the UK company will release it on its own. This marks the first ever legitimate home video release of "Wet Job."  Despite being scripted by series creator James Mitchell, "Wet Job" doesn't have a very good reputation.  (Even Edward Woodward disparaged it in his commentary on the Acorn release Callan: Set 2.) That said, fans of the series (and, really, any spy fan should be a fan of this amazing series) will still rejoice to be able at last to own this elusive postscript to one of the best serious spy shows of all time.  While the title hasn't yet been officially announced by Network, an Amazon UK listing shows the release date for the Region 2 PAL disc as March 28, 2011.  Retail is £14.99, but it can be pre-ordered from Amazon right now for just £8.99. Then (also according to Amazon), next Ocotober the company will issue Callan: The Definitive Collection, a 12-disc megaset collecting every surviving black and white episode from seasons 1 and 2, every color episode from seasons 3 and 4, the original Armchair Theatre pilot play, "A Magnum For Schneider," "Wet Job," a brand new Callan documentary and a definitive book on the series by Andrew Pixley. That will retail for £99.99 (though it's currently available to pre-order for £69.99). It's great that Callan will finally get Network's usual special feature treatment, but at the same time no doubt annoying to fans who have already purchased The Monochrome Years and The Colour Years on their own. Hopefully the company will make the documentary available individually as well, as they have done in the past with their Prisoner and Saint documentaries. Fingers crossed! In the meantime, I'm absolutely thrilled that I'll finally be able to see "Wet Job," even if I know it won't be up to the standards of the show itself. This is great news!

This is great news about Wet Job but it would be better if they included the 1974 Callan movie with it. What they really should've done was delayed releasing the color episodes until they could include Wet Job. As for the definitive set, pass. Much as I enjoyed Callan, it's not The Saint where I was willing to buy US, UK, and AU sets.