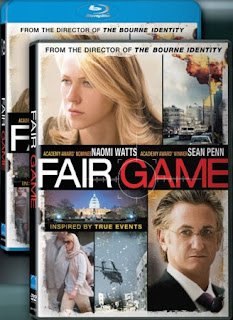 DVD Active reports that Summit Entertainment will release Bourne Identity director Doug Liman's latest spy movie, Fair Game, on DVD and Blu-ray on March 29. Liman finds the Le Carré-esque spy story at the heart of the infamous Valerie Plame affair, and makes the most of it, bringing the same "in the moment" sort of hand-held, real-time camera work that captured the action in Bourne to the conference rooms of CIA headquarters in Langley–and making intense debates just as exciting as a car chase! (Read my full review here.) The only extra seems to be a commentary with the real Valerie Plame Wilson (played marvelously by Naomi Watts in the film) and Joe Wilson (played by Sean Penn), which is a bit disappointing.  I would have like to hear from Liman. Still, Fair Game is a fantastic spy movie (among my favorites of the year), and well worth checking out at home if you missed its limited theatrical run. Retail is $22.99 for the DVD and $30.49 for the Blu-ray, but both will inevitably be available online and in stores for less than that.
Posted by Tanner at 2:38 PM

Tanner - I figured you might want to let your readers know of two rarely shown on TV spy / spy related movies playing this Friday, January 28.

(I think these are Central time, but check local listings to be sure)