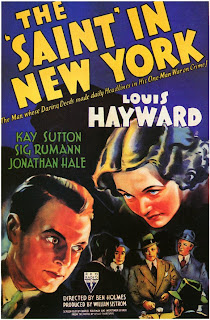 This Tuesday, October 12, TCM will air a marathon of the original black and white Saint movies, titles which remain stubbornly unavailable on DVD in the United States.  (This marathon had originally been scheduled for last June, but it was pre-empted due to one of their daylong tributes to someone recently deceased. I forget who now.) The line-up, from TCM's website, is as follows: 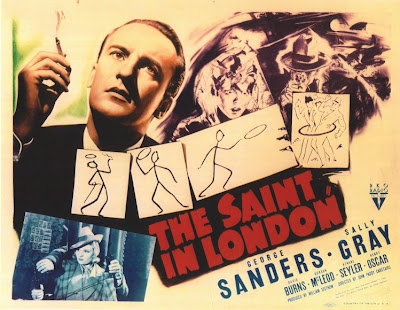 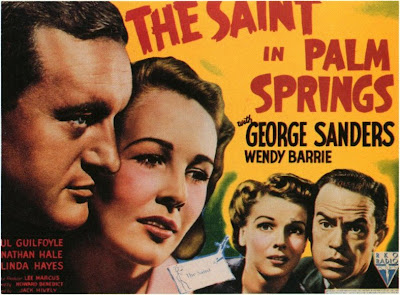 The cable channel will also show Who Was that Lady? (review here) and another movie I discussed in my Tony Curtis obituary, Don't Make Waves (not a spy movie, but lots of Sixties fun) as part of another one of those tributes to the recently deceased, this time in honor of Curtis, on Sunday.  There are a whole bunch of great Curtis movies in that line-up, but, not surprisingly, no other spy titles.
Posted by Tanner at 1:36 AM

I've only seen couple of the Saint movies. They're fun.

Whoops, sorry. I was awfully tired when I posted that last night and left in the date from when this post had originally been prepared before the last marathon was pre-empted. It's October 12. Changed it above.

Yes, these black and white Saint movies are fun! And every actor brings something different to the role. George Sanders is great, but I think my favorite is probably Hugh Sinclair, who returned years later for Hammer's Saint production.

I haven't seen the Hugh Sinclair Saint movie but I'll be looking out for it. I love Leslie Charteris's original Saint novels as well.

"...I think my favorite is probably Hugh Sinclair, who returned years later for Hammer's Saint production."

Hammer tried to revive the character with Hayward reprising the role in The Saint's Return, aka The Saint's Girl Friday, in 1953. Unfortunately, the rights situation with that one seems to be complicated and it wasn't included when the other Saint movies turned up on VHS double features in the 90s nor in any of the Hammer waves on DVD on either side of the Atlantic. It also doesn't play when TCM does their Saint marathons. It's pretty good though. Hopefully it will be released one day, somehow...

You're right, Christopher; I meant to say Louis Hayward and not Hugh Sinclair in my first comment. Hayward's my favorite. Sorry for the confusion.

I'm a Sanders man but Hayward was very good. Wish he'd had a couple more chances at it before Sanders took over. I have no idea how many of these I've seen because I get them mixed up with each other and with the Falcon movies Sanders did later. It doesn't help that Wendy Barrie was in both series too, playing essentially the same character but with 4 or 5 different names!

Some nice RKO Saint images there. So far as I know, Hammer has the rights to "Girl Friday". What I suspect will happen is that WB will release the 8 Saint films they have via their Archive system and, at some point, Hammer will get around to releasing their sole entry. The 8 RKO's are available on dvd in Spain & France with English soundtracks but, why buy them if they're missing "Girl Friday"?