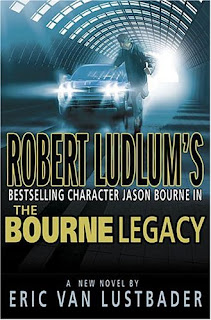 New Bourne director (and returning screenwriter) Tony Gilroy has told Hollywood Elsewhere (via Dark Horizons) that Matt Damon will not be back for the next Bourne movie, and indeed that his character (known best by the moniker of Jason Bourne, even if that's not his real name) won't appear.  He set the matter straight on some other things, too, and basically confirmed what I've speculated here before.  The title will be The Bourne Legacy, but the film will bear no resemblance to Eric van Lustbader's continuation novel of that name, just as The Bourne Supremacy and The Bourne Ultimatum bore no resemblance to the plots of Robert Ludlum's novels of those titles.  "It's a completely original screenplay," Gilroy told the website, adding, "This is not a reboot or a recast or a prequel. No one's replacing Matt Damon. There will be a whole new hero, a whole new chapter... this is a stand-alone project."  He goes on to further clarify that Jason Bourne is still "very much alive," though he won't be a character in this film.  "What happened in the first three films is the trigger for what happens. I'm building a legend and an environment and a wider conspiracy."  Head over to Hollywood Elsewhere to read everything Gilroy had to say.

Personally, I've got to say I'm a tad disappointed.  I had really hoped that Damon would see reason and return to the role that solidified his stardom, but he appears to be ingrateful.  Gilroy stipulates that this story will leave the door open for Damon's Bourne to return again in the future, so perhaps he'll still get a Never Say Never Again moment down the line.  Failing Damon's return, I would have preferred to see the role simply recast, Bond-style (not rebooted or remade), with the supporting players all returning and no one commenting on Bourne's "new face" or anything silly like that.  Instead, we get a sequel without the titular character, and it will be interesting to see how audiences respond to that.  I guess the title The Bourne Legacy is very much appropriate, though, to what Gilroy is proposing...
Posted by Tanner at 1:53 PM

Dumb idea. Won't make anywhere near the money the previous films made.

I can see it now: Ted Wass returns as bumbling American detective Clifton Sleigh, traveling the globe in his search for the missing Jason Bourne, who appears in the film via outtakes edited from the earlier films.

SPOILER: In the last reel, "Bourne" is revealed to have had plastic surgery making him look just like Roger Moore.

It's a guaranteed hit, I tell you.

Should be called "The Bourne Lunacy." What's going on here? There's no Jason in this Bourne, but we'll set it up for his return later? So if there's a huge payoff with Damon's possible return down the road, why bother sitting through this entry?

Despite Gilroy's talent, this whole project is beginning to look like "Operation Kid Brother." I'm with you, Tanner. Just recast the damn thing.

David, your comment cracked me up! Great comparison, though. There's not a particularly rich history of continuing series with the main character in absentia, is there? (Although a Roger Moore-as-Bourne reveal would probably end up selling me on the take!)

I agree with all you guys. Delmo, you put it very succinctly. Christopher, I'll be very interested to learn what Gilroy's gimmick is that he thinks will make people want to invest in what, as you say, sounds basically as filler waiting for Damon to return! Does anyone want to watch a whole movie about Landy and Nikki? That's sort of akin to making a Bond movie with M and Q and Moneypenny, but no 007 to be found. Sounds like that Duchovny-less final season(s?) of The X-Files. Treading water waiting for the star to come back.

Speaking of which, the whole move seems very transparent. I hope this isn't what it is, but what it looks like is that Universal is desperate for a new entry in the money-making franchise, but can't wait for Greengrass and Damon to get around to it on their own time. So they decided to create a filler episode that can fill the gap between Damon Bournes. If that's the case, I understand their reluctance to recast, but what's the point? Even if you recast for just one movie (creating the George Lazenby of Jason Bourne), the fans will still accept Damon back later, as they did with Connery...