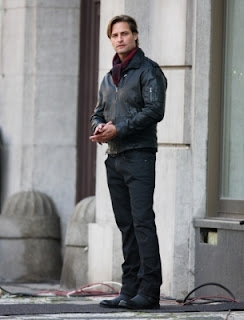 Fanpop (via Dark Horizons) has the first images of Lost star Josh Holloway in his new role as Impossible Missions Forces agent in Brad Bird's Mission: Impossible 4.  Of course, we already know it's not necessarily going to be called Mission: Impossible 4, and AICN has some of the supposed alternatives, all of which sound pretty dumb and require too many colons.  But apparently M:I-4 is still in contention, and that's probably the smartest way to go.

When I heard there were pictures of Holloway on set, I was hoping he'd be doing something cool and spyish like dangling (as we saw Tom Cruise doing a few weeks ago) or pulling off a mask or at least clutching a gun.  But he actually manages to look cool–and even spyish–just standing there.  Especially since his cold weather clothes are such a contrast to the island wear Lost fans are used to seeing him in.  And I see he has the regulation IMF haircut: floppy.
Posted by Tanner at 4:56 PM