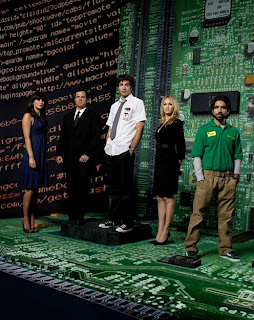 Chuck fans have long learned to live always on edge, wondering when the axe might drop on their favorite series and they might have to spring into action and eat a lot of Subway sandwiches or organize rallies and letter writing campaigns to save their show.  Well, now they can rest easy!  (Until May anyway, when we have to worry about renewal for another season.)  Deadline reports that the network has given the series a full season order for this year. After an initial 13 episode order for Season 4, NBC has now given the greenlight to an additional 11 for a complete 24-episode season.  Meanwhile, the network has also commissioned four additional scripts for J.J. Abrams' Undercovers despite that show's unimpressive ratings.  Hopefully those scripts will make it to production.  And hopefully they mark some of those improvements I wished for in my review of the pilot.  I'm still enjoying the series, but it could really stand a little bit of character development.
Posted by Tanner at 1:56 PM