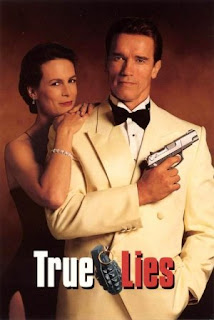 Upcoming Spy Screenings: True Lies In LA
Want the chance to see True Lies again on the big screen before it comes back to life as an ABC TV show next season?  Well, if you're in the greater Los Angeles area, then you're in luck. James Cameron's big-budget 1994 Arnold Schwarzenegger spy comedy will screen at the Aero Theatre in Santa Monica on Saturday, October 16–and co-star Jamie Lee Curtis will be on hand for a Q&A after the film!  It's a Curtis double-bill with A Fish Called Wanda, which is first on the bill.  That starts at 7:30, so True Lies probably begins around 9:25 or so.  (Though I don't know why you'd want to skip A Fish Called Wanda if you're already heading out to the theater anyway...)  When it came out theatrically, True Lies served as a surrogate for anxious Bond fans during the long wait between Licence To Kill and GoldenEye; maybe it can accomplish the same feat now.
Posted by Tanner at 9:17 PM