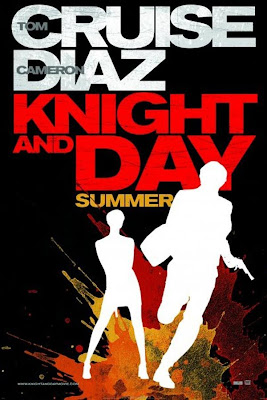 After being branded such a flop that it warranted a radical rethinking for the new Mission: Impossible movie (the positive upshot of which is that we might finally end up with more of a team movie instead of a star vehicle!), it turns out (as I've contended before) that the Tom Cruise/Cameron Diaz spy parody Knight and Day (review here) didn't do so badly after all.  In a Deadline story about another, unrelated Cruise project, Mike Fleming reports:


[It's] worth nothing that by the time Knight and Day completes its run in Japan, the film will wind up grossing better than $264 million worldwide. Because the picture did only around $69 million domestic, Cruise and Cameron Diaz got a pretty good drubbing. But the number is comparable to films like the Adam Sandler comedy Grown Ups, which was considered a summer hit. That film had a strong opening weekend and did most of its business domestic, but  Knight and Day did better overseas. That overseas launch came later because of the World Cup.

Good to set the record straight, anyway. As previously reported, Knight and Day (which was a lot of fun!) comes out on DVD and Blu-ray on November 30.
Posted by Tanner at 6:45 PM