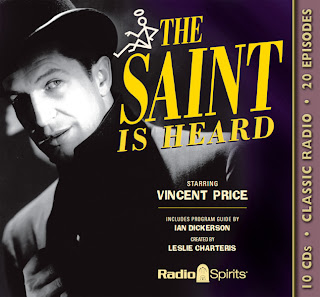 With TCM airing a Saint movie marathon next week, it seems like a good time to check in on what's new in the world of Simon Templar.  After a relatively quiet summer for halo fans, The Saint website announced a couple of pieces of exciting news last month.

First, a company called Radio Spirits has issued twenty remastered episodes of the Saint radio show on CD in a 10-disc set called The Saint is Heard.  The majority of these episodes, which come from the 1949 and 1950 seasons, feature the most famous voice of the radio Saint, Vincent Price, though a few feature Barry Sullivan filling in when Price was off shooting a movie.  Chances are most Saint fans have heard at least a few of these, but if you haven't, they're a lot of fun.  Leslie Charteris' immortal character seems to be slightly different in every medium he's adapted into, and radio is no exception.  These episodes sometimes sway a tad closer to the later-era Shadow radio programs than the RKO Saint films or Charteris' novels, but they are certainly a whole lot of fun and a great way to pass a long commute in your car.  Perhaps best of all, The Saint is Heard includes a Program Guide written by Ian Dickerson, author of The Saint On TV and noted Leslie Charteris expert, featuring photographs and a series history! The Saint is Heard, a 10-CD set, retails for $39.98–though of course it's considerably cheaper on Amazon.  Listeners can order directly from Radio Spirits' website (though they only ship domestically) or from Amazon.

A more recent (1995) BBC radio version that hews much closer to Charteris (it certainly should; it's based on his novels Saint Overboard and The Saint Plays With Fire) starring Paul Rhys has been available on CD since last May. The Saint: Saint Overboard & The Saint Plays With Fire: Two BBC Radio Crimes Full Cast Dramatizations, a 2-disc set, retails for $24.95 but can be had for slightly cheaper on Amazon.

In even more exciting Saint news, the Saint website reports that Moonstone Comics (the same company that's developing a new Honey West series) has acquired the rights to the character and intends to publish brand new Saint comic books and graphic novels!  Unfortunately, there isn't much information available yet, but this is certainly something I'll be keeping an eye out for.  I believe (though I could be wrong, and I'm sure some of my more Saint-savvy readers will correct me if I am) that this will mark the first time The Saint has appeared in comics since the Sixties, when there was a Scandanavian series that featured Roger Moore's likeness.  Moonstone's website certainly doesn't provide any indication that this might be the case, but I sure hope that the company's license also allows them to reprint those and older Saint comics.  I'd love the chance to read them!
Posted by Tanner at 6:10 PM

Email ThisBlogThis!Share to TwitterShare to FacebookShare to Pinterest
Labels: Comics, Radio, The Saint

Eternity Comics did a batch of reprint comics of the old newspaper strip in the late 80s (called Private Eyes, for some reason.) Good luck finding them in your local funnybook store (no long underwear = no orders.)

And the Vincent Price Saint radio series is available online, it having long since slipped into public domain. Here's the link...

Tex
(halo still at the cleaners)

Just to correct one thing...the radio shows are not public domain and I'm working on getting them removed from archive.org.

Radio Spirits is great! I used to have a large collection of their sets. Yes, many OTR shows can be found on-line (some of dubious rights-issues), but fans will get the best sound from folks like Radio Spirits who work to collect and officially release material. I liked Vincent Price as The Saint on radio.
-Jace (Spy Vibe)

I submitted samples to Moonstone in an attempt to work on their Saint comic. Never heard back from them. Guess my work was found lacking.

Thanks for the info about the comic strips, Tex! I had no idea that Eternity had reprinted the Saint comics - and I bought all the Shadow ones they did (called "Crime Classics," I think) back then. Now I have to track these down!

And I'm glad you enjoy the Saint posts. I know he's not technically a spy, but Simon gets mixed up in enough espionage over the years (especially the Roger Moore years) that he definitely qualifies for coverage here. Click the "Saint" tag to dig up oler posts on the subject.

Sorry to hear you didn't land that gig, Delmo. With your love of the character and the great job you did on the Roger Moore comic bio all those years ago, I know you would have been perfect! Oh well. Out of curiosity, can you share with us what your Simon looked like? The article on TheSaint.org reports that they're going with a Gregory Peck-like Saint. Was your take based on any actor?

I didn't do specific Saint pages, just sent general artwork. Had I been given the job, and since I couldn't make him look like Roger, I would've based his looks on the comic strip version, preferably the John Spranger run, which is what the Eternity Comics reprint covered.