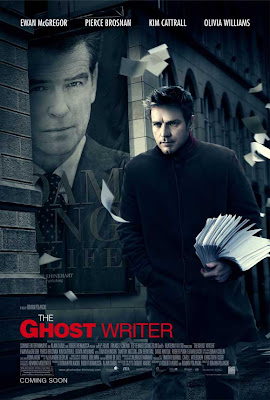 The Aero Theatre in Santa Monica hosted George Lazenby last month; next month they will play host to another James Bond: Pierce Brosnan.  Brosnan will appear in person to conduct a Q&A between screenings of his two best post-007 films on November 20.  The Ghost Writer (review here) screens at 7:30 followed by Brosnan's Q&A and then a screening of The Matador.  The American Cinematheque, who runs the theater, bills the event as "an in person tribute that includes two of Brosnan's finest performances," and they're certainly not wrong.  Picking his top two, however, I personally would have substituted John Boorman's The Tailor of Panama for Roman Polanski's The Ghost Writer, but since the event is probably intended to raise Brosnan's profile with Academy voters for well-deserved Best Supporting Actor consideration for this year's The Ghost Writer, that wouldn't make a lot of sense.  It should be a great night nonetheless. Tickets should be available soon through Fandango if they're not already.
Posted by Tanner at 12:23 AM