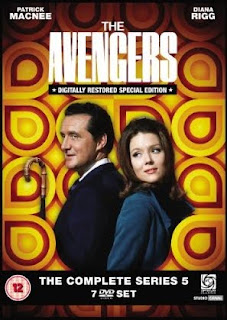 The biggest spy release this week comes from across the pond–and concerns my favorite of all spy shows.  Optimum's latest digitally remastered (and they mean that legitimately, not just in a low-budget, "hey, it's on DVD, isn't it?" kind of way) special edition Avengers set, The Avengers: The Complete Series Five, hits UK shelves as a 7-disc PAL Region 2 DVD set.  Don't be deceived by the cheap-looking cover art. These releases are amazing! Not only the remastering (which is top-notch; see some screen comparisons at The Avengers Declassified), but also the plethora of amazing special features.  This set comprises the color Diana Rigg season, which is probably the best gateway era for new fans.  Overall I'd say the earlier black and white Riggs are my very favorite period, but the psychedelic late-Sixties colors really make Series 5 pop.

Among the many, many extras included here are multiple audio commentaries, episode introductions, cut scenes, archival television presentations, and more. Brian Clemens contributes a commentary track for "Murdersville," as does scriptwriter Richard Harris on "The Winged Avenger." Diana Rigg sadly doesn't do a commentary, but her stunt double, Cyd Child, does, on "Return of The Cybernauts." And possibly best of all, we get a commentary from scene-stealing guest star Peter Wyngarde on his greatest, most scenery-chewsing Avengers role in the classic episode, "Epic," one of my personal favorites! But that's not all... Clemens provides filmed episode introductions to "The Bird Who Knew Too Much," "The Living Dead," "Epic," "The Correct Way To Kill," "The Superlative Seven," (love those two!), "A Funny Thing Happened On The Way To The Station," "The Joker" (oh, another favorite!) and "Murdersville." There's also a German TV interview with Patrick Macnee and Diana Rigg, ATV newsreel footage of Rigg receiving a TV Award, "film trims" (short cut bits) from "The Fear Merchants," "Escape in Time," "From Venus With Love" and "The See-Through Man," a "They're Back!" archive trailer, original Sixties German titles, "Granada Plus Points" for each episode (previously released as "Follow the Hat" on the old UK Contender DVDs), stills galleries, copious PDF material (scripts, TV Times, etc.), an insert reprint of the original Series 5 promotional brochure, more painstaking "episode reconstructions" for lost Series 1 episodes ("One For The Mortuary," "Death on The Slipway," "Tunnel of Fear" and "Dragonsfield") and the 1993 documentary presented by Patrick Macnee, "The Avengers – A Retrospective." Whew!  The Avengers: The Complete Series 5 retails for £59.99 but is available from Amazon.co.uk for £42.99 right now. 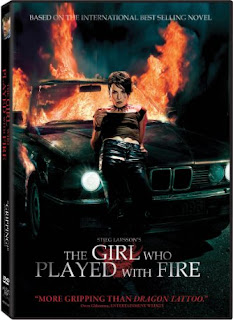 Stateside, Music Box Films (who have released the two excellent recent OSS 117 films on DVD) bring us the Swedish thriller The Girl Who Played With Fire, second in the film series based on Stieg Larsson's "Milennium Trilogy" of novels, on both DVD and Blu-ray. The first movie, The Girl With the Dragon Tattoo

(like the book it was based on), was a dark mystery thriller involving an unsolved decades-old disappearance and a serial killer. The second one follows the same main characters, investigative journalist Mikael Blomkvist (Michael Nyqvist, who will appear in the next Mission: Impossible movie) and Lisbeth Salander (the excellent Noomi Rapace) as they're plunged–unexpectedly–into a Ludlum-esque conspiracy thriller involving the Swedish Intelligence Service and a Cold War-era Soviet defector.  I haven't seen this film yet, but like most of the world, I loved the book, so I'm looking forward to it.  The movies are of course being remade in English with Daniel Craig playing Blomkvist.  The third novel is a full-on spy thriller, so its American film will probably mark Craig's first foray into the genre outside of the 007 series since becoming the most famous spy of all.  I have no doubt that Craig will be great and look forward to David Fincher's take on the first book, but see these Swedish films first. 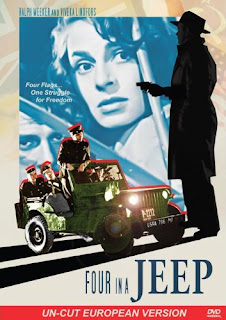 Finally, VCI Entertainment brings us an obscure early Cold War thriller, Four in a Jeep.  This is another one I haven't seen, but it sounds pretty cool.  Set in post-war Vienna, when the city was occupied by the Americans, the British, the French and the Russians, Four in a Jeep follows a police patrol comprised of one sergeant from each nationality as they undertake a mission to capture a prisoner recently escaped from a Soviet POW camp.  Cold War tensions quickly heat up as the policemen disagree about how to handle the situation.  Ralf Meeker stars.
Posted by Tanner at 3:44 PM

sorry if i missed this, but any buzz about these remasters in a region 1 release?