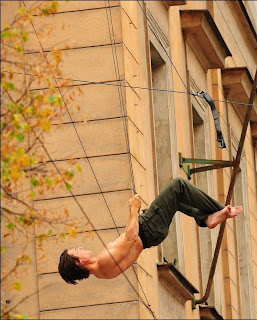 It wouldn't be a Mission: Impossible movie without some dangling, would it?  What tight, complex, multi-layered cons were to the TV series, dangling is to the movies–ever since Brian De Palma borrowed a famous scene from Jules Dassin's Topkapi for the first Mission: Impossible film.  (Since then it's become a famous Mission: Impossible scene instead of a famous Topkapi scene.)  Anyway, a Belgian newspaper, HLN, now provides (via AICN) our first glimpses of Tom Cruise's IMF agent Ethan Hunt doing any new dangling–bare-chested dangling no less.  In Prague!  But I don't think the dangling itself will actually be in the J.J. Abrams-produced, Brad Bird-directed Mission: Impossible 4 (or whatever it ends up being called). Instead, this rig appears to be for a stunt, and all wires will no doubt be removed in the final product.  Still, for now it's Ethan Hunt dangling, so that counts for something.  Not as much as say, Jim Phelps changing his facial expression, but it still counts for something.  Head over to HLN to see a whole gallery of shirtless dangling images. (Just click the "volgende" link to move forward.)

Click here and here to read more about the eclectic cast of Mission: Impossible 4.
Posted by Tanner at 12:51 PM