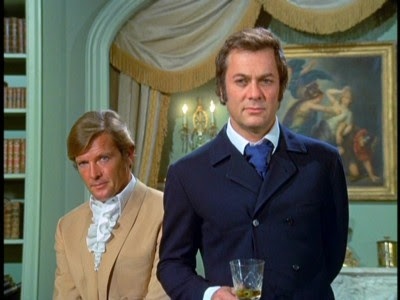 One half of The Persuaders! is gone.  It's with great sadness that I mark the passing of Tony Curtis, who died yesterday of a heart attack at the age of 85.  It's kind of weird that I've blogged so little over these past four years (four years?!) about the two spy shows I love the most, The Avengers and The Persuaders!, but I've just been exploring other, more obscure shows in the time I've been blogging instead.  Eventually, I will go back to those first loves and it will feel like coming home.  But coming home to The Persuaders! won't quite be the same knowing that Tony Curtis is no longer in this world.

The Persuaders! hinged on the chemistry of its two stars, Curtis and Roger Moore (or "Curtis + Moore" as the pair were equably billed on the same screen), and their interplay is what makes it a favorite of mine.  I'll admit, it was Moore (unsurprisingly) who first attracted me to The Persuaders!, but I quickly realized that Curtis played an equal part in making it great.  And the show made me love him.  Sure, I was familiar with his more famous film work before seeing it, but bore no particularly strong feelings one way or the other.  But his performance as the freewheeling American adventurer Danny Wilde, impetuous, contrary and always gloved, made me see a different side of Tony Curtis and gave me a new appreciation for his talents.  In fact, I would rank his work in its pilot, "Overture," right up there with his most famous film performances.  The Persuaders! is likely to be little more than a footnote in most obituaries, but hardly anything better displayed the actor's great charm and wit.  Which isn't to say he didn't have a hell of a career before it, as well.

For an actor who dabbled in many, many genres over the years, Curtis (born Bernie Schwartz) played surprisingly few spy roles (although he spawned a daughter, Jamie Lee Curtis, who went on to star in a pretty big one, True Lies).  Besides The Persuaders! (which, like all ITC shows, featured espionage plots with reliable regularity), Curtis' only notable spy role that I can think of off the top of my head was in the somewhat execrable Who Was That Lady? (1960) with Dean Martin and Curtis' then wife Janet Leigh. But The Persuaders! alone (even if his character isn't a professional secret agent) ensures Curtis a prominent spot in Spy Star Valhalla.  He can also claim (in a tangiential spy connection) to have worked with three Bonds.  In addition to working with Moore on The Persuaders!, Curtis also made The Mirror Crack'd, with Pierce Brosnan (in a very small, uncredited role) and the infamous Sextette with Timothy Dalton.

Curtis' early career, marked by lots of frothy matinee idol roles, saw him quickly categorized as a lightweight actor. Such generalizations, however, ignore some impressive early parts, like the title role in the 1953 biopic Houdini. Critical acclaim did come, though, for strong dramatic turns in movies later in the Fifties like The Sweet Smell of Success, The Defiant Ones (for which he earned an Oscar nomination) and of course Billy Wilder's classic drag comedy Some Like It Hot (a role he wasn't above riffing on later in his career, from absurd Seventies sex farces like the guilty pleasure Some Like It Cool - also starring spy sirens Marisa Mell, Sylva Koscina and Britt Ekland - to a hilarious reference on The Persuaders!).

He took some heat for his Bronx accent when playing in historical dramas and swashbucklers like Spartacus, The Vikings and The Black Shield of Falworth ("Yonda lies da castle of my fadda!"), but the truth is he's pretty awesome in them.  I love his performance in Spartacus!  Curtis himself was fond of pointing out that a stuffy British accent was no more accurate to ancient Rome than his own Bronx brogue, except that conventions had dictated us to expect it.

Curtis considered the Sixties the nadir of his career (up to that point anyway; he couldn't have imagined the Eighties!), which was revived the following decade on TV.  But many of my personal favorite Curtis movies come from that decade, including the zany race caper Those Daring Young Men in their Jaunty Jalopies, a terrifying turn as The Boston Strangler and my own favorite Curtis movie, Don't Make Waves (1967).  Seriously, when everybody else is paying homage this weekend by watching Some Like It Hot for the zillionth time, try this one instead (if you can find it).  It co-stars the luscious Claudia Cardinale and Sharon Tate, features an awesome Byrds title track and captures California culture on film better than anything from that decade besides The Loved One.

Tony Curtis was one in a million.  We've seen (again and again) the first half of his life unfold (in the guise of Danny Wilde) to one of the greatest theme songs of all time (courtesy of John Barry).  Now, for Persuaders! fans, at least, his afterlife is ensured to unfold to that theme as well, because with a show as good (if underrated) as that, and an equally imporessive filmography, Tony Curtis is truly immortal.
Posted by Tanner at 2:17 AM

I didn't know that Tony felt that way about his 60s output. I'm surprised but his heyday was the 50s and 60s. After 69, his career tanked except for Persuaders and Vegas. I love his 60s films. Why he never made a comic spy film like the Flints always puzzled me.