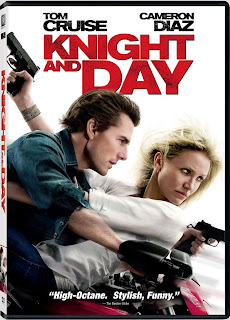 This summer's two big Hollywood spy movies have both been scheduled for DVD releases in time for the holidays.  Fox Home Entertainment has announced that the highly entertaining Tom Cruise/Cameron Diaz spy spoof Knight and Day (review here) will be released in several configurations on November 30: a single-disc DVD, a 3-Disc DVD/Blu-ray Combo Pack with Digital Copy, and a "limited time Holiday Gift Set," which seems to be the same as the Combo Pack, but without the stupid digital copy. If you ask me, that makes it the version to buy. (I really hate those digital copies and everything they represent. Movies are not meant to be watched on tiny cell phone screens!) Special features on all three versions include the featurettes "Wilder Knights and Crazier Days" and "Knight and 'Someday': Featuring the Black Eyed Peas and Tom Cruise" (which sounds downright apocolyptic to me), the viral videos "Soccer" and "Kick" and the theatrical trailer.  The Blu-ray configurations will include all that plus the BD-Live Extras "What’s New, "Live LookUp," "Exclusive: Not Your Regular Spy" and "Highlight: Excerpt from Wilder Knights and Crazier Days." (No, I'm not quite sure what the advantage is of having an excerpt from a featurette also included in its entirety, but there you have it.)  SRP is $39.99 for the 3-disc Combo Pack, $34.98 for the limited Holiday Gift Set and $29.98 for the DVD, but of course all three will be findable much more cheaply, and indeed are available for pre-order more cheaply on Amazon and other sites. I wish they'd had the courage to stick with the film's really cool theatrical poster design for the cover, but given its poor box office reception it was probably a good idea to switch to a more traditional show-the-stars'-faces look. And as far as star face DVD covers go, this one's actually not bad.

Knight and Day isn't the only big spy movie coming out in time for the holidays.  DVD Active reports that Salt will be out one week later from Sony Pictures Home Entertainment in an equally baffling assortment of configurations.  Phillip Noyce's Angelina Jolie spy thriller (review here) will be available December 7 (although there's some discrepency on that street date) in rated DVD, unrated DVD and unrated Blu-ray versions. According to the site, there will be no special features on the rated DVD, but the various unrated versions will include a filmmakers' commentary, an unrated filmmakers' commentary, an unrated extended filmmakers' commentary (Huh? I'm guessing these multiple commentaries indicate that multiple cuts of the film will be included on the discs, and not just the unrated one...), the featurettes "The Ultimate Female Action Hero" and "Spy Disguise: The Looks of Evelyn Salt," and Phillip Noyce's interview from the NPR radio series "The Treatment." (I caught this when it first aired, and it was a really good interview wherein Noyce spent a lot of time discussing his fascination with spies and why he keeps returning to espionage themes in his movies.) 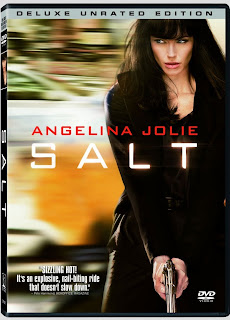 The Blu-ray release will also offer a "Spy Cam: Picture-in-Picture" function and several additional, spy-centric featurettes: "The Real Agents," "The Modern Master of the Political Thriller: Phillip Noyce" and "False Identity: Creating A New Reality." SRP is $28.96 for the theatrical cut and unrated cut on DVD, and $34.95 for the unrated Blu-ray; obviously all can be found for considerably less.
Posted by Tanner at 2:25 AM