Upcoming Spy DVDs: Man In A Suitcase Arrives In America! 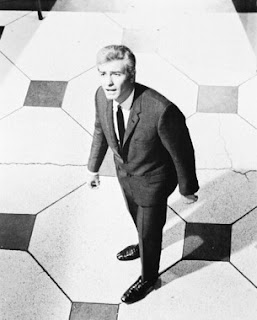 Early next year, Acorn Media will release one of the crucial Sixties ITC spy series hertofore absent from U.S. shelves: Man in a Suitcase, starring Richard Bradford. Bradford plays McGill, a disgraced former CIA agent now exiled to Europe where he sells his services as a detective, bounty hunter and freelance spy–albeit one with a strict moral code.  The series has a harder edge than most ITC adventure shows like The Saint and The Champions, though it does feel like a logical follow-up to Danger Man, for which it was envisioned as a replacement when Patrick McGoohan quit to make The Prisoner instead.  Despite the darker tone, lots of regular ITC faces show up as guest stars including Stuart Damon, Donald Sutherland and Bernard Lee, as well as Hammer beauty Barbara Shelley.
Man in a Suitcase lasted one thirty-episode season and also spawned one of those "movies" made by editing a two-parter together for theatrical release in Europe, To Chase A Million. I think the film (or at least its titles and any original bridging material) was included on Network's Region 2 release, but we have no word yet on whether that or the interview with Richard Bradford (or any of Umbrella's Region 4 extras) will be ported over to the Region 1 set.  In fact, we don't even know price, date or configuration.  It seems likely that Acorn will divide the series into at least two sets given their previous releases.  All we know is that the first(?) release will occur in early 2011, and we should have more details soon.

Man in a Suitcase also boasts an awesome soundtrack by Albert Elms and Ron Grainer, and it's one of Network's best ITC soundtrack releases to date. Highly recommended!
Posted by Tanner at 2:22 PM

This is great news. I loved this show!