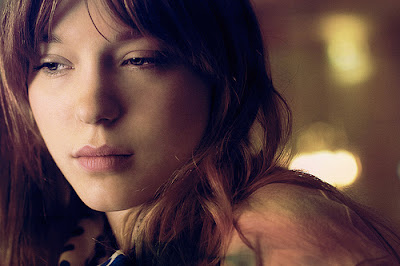 Yes, this is the third M:I-4 story in a row. There's a lot of news about the Tom Cruise sequel flying around right now. The Hollywood Reporter has confirmed yesterday's rumors that French actress Léa Seydoux will play a villainess in the fourth Mission: Impossible film. She will be the film series' second female French baddie, in fact.  Seydoux had a small at the beginning of Quentin Tarantino's Inglourious Basterds, and played a princess in Ridley Scott's recent Robin Hood movie, but so far she's probably most famous for a role she didn't play: she was reportedly one of the final candidates for the role of Lisbeth Salandar in David Fincher's Hollywood version of The Girl With the Dragon Tattoo.  But now she'll team–in villainy–with the co-star of the Swedish film, Michael Nyqvist, for Mission: Impossible 4.  The film is now shooting and new casting news seems to pop up every day.  For more on that, see yesterday's post.
Posted by Tanner at 1:02 PM