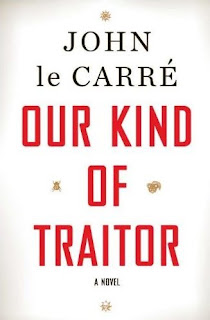 New Spy Books Out This Week: John Le Carré's Our Kind of Traitor

I've been seriously lacking in my coverage of spy novels lately (particularly in failing to cover the UK release of Jeremy Duns' new novel, Free Country after such a stellar debut; I'll be rectifying that soon), but I have to mention when the foremost living practioner of the genre releases a new book. John Le Carré latest novel, Our Kind of Traitor, hits American shelves today. (It came out in Britain a few weeks ago.) Our Kind of Traitor tells the story of a vacationing couple caught up in a global war of wits between an murderous Russian gangster/arms dealer and various unscrupulous factions within the British Secret Service.  As previously reported, a film version is already in the works.

October is a huge month for spy novels in the US.  On the 26th, Greg Rucka's eagerly anticipated new Queen & Country novel, The Last Run, will be released, and the same day sees (at last!) the long-awaited American publication of Jon Stock's Dead Spy Running.