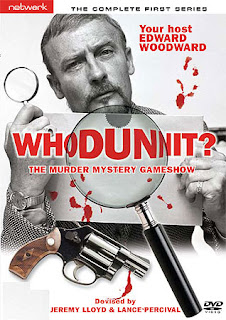 It's not "Wet Job," but it's a Callan reunion of sorts in Whodunnit?, a unique panel gameshow from the Seventies hosted by Edward Woodward on which Russell Hunter (Lonely on Callan) is one of the guests.  And it's coming to Region 2 DVD this fall from Network.  Whodunnit? challenged celebrity contestants to solve a fictional murder mystery.  I'm not familiar with the show myself, but UK readers who were around in the Seventies probably remember it.  Here's Network's description: "The show’s brilliantly original formula, devised by comedians Lance Percival and Jeremy Lloyd (and revived in the 1990s for Cluedo), presented short dramas laden with clues to be pieced together by the panellists, who would then question the characters involved and finally point the finger at the most likely suspect; lively repartee was the order of the day." Other guests appearing on the first season (which is what you get, along with the pilot, on this 2-disc set) include James Bond author Kingsley Amis and real-life private eye Anne Summer.  The PAL Region 2 DVD comes out on November 29 and retails for £19.99, though it will be available from Network's website discounted to just £11.99.
Posted by Tanner at 9:27 PM