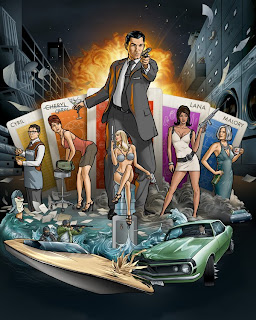 Fox Home Entertainment has just given me a wonderful birthday present: according to TV Shows On DVD, the studio will release the half-hour animated spy comedy Archer: Season 1 on DVD on December 28... my birthday!  And I couldn't be happier.  Archer is my favorite new spy series to debut this year (closely followed by the radically different Covert Affairs), and I've been itching to have it on DVD ever since I had to delete all the episodes from my DVR for space reasons. A workplace comedy about a Bond-like (or, more accurately, Eurospy-like) superspy who's also a huge jerk and his dysfunctional family (some of them literally, some only figuratively) who work at the spy agency, Archer is a show that lends itself to rewatching.  According to the website, the 2-disc set will include plenty of extras. Among them: the original unaired Archer pilot (Wow! I didn't know about that!), an unaired network promo, deleted scenes, a six-part "The Making Of Archer" featurette ("3D", "Animation", "Art Direction", "Backgrounds", "Illustration" and "Storyboards"), plus bonus episodes (each one is the pilot episode) from unrelated FX sitcoms The League and Louie (the latter of which is quite funny, if not at all spy-related).

I'm really glad they're incorporating all of that behind-the-scenes material.  Archer is a great looking show, and I'm eager to see more about what goes into it.  It's so good looking, in fact, that I really hope the studio announces a Blu-ray release as well. I rarely care about that, but this is one series that would look great in HD. At this year's Comic-Con panel, the creators of Archer went into a bit of detail about creating the look of Archer's perpetual Cold War world, which incorporates Bondian elements of every era from the Sixties to the Eighties to now (including suits that could have come off of Sean Connery's shoulders, stylish Sixties office furnature and a Living Daylights Aston Martin Volante).  They said that the design team was constantly flipping through Sixties style and design and fashion magazines, picking what they liked.  I hope that's in the documentary.  It's a shame that the Comic-Con panel itself isn't included, but this list is still subject to change.  Retail will be $29.98.

Packaging hasn't yet been revealed, but I sure hope they go with that awesome McGinnis-esque promo artwork for the DVD cover!  Overall, though, I'm just glad that I'll be able to watch Season 1 of Archer whenever I want, and that anyone who missed the first seaon on TV will now get to discover it on disc.  It's really a wonderful show, and the premiere episode of Season 2 (shown at Comic-Con, but not set to air until January) is probably the best episode yet!
Posted by Tanner at 1:08 PM