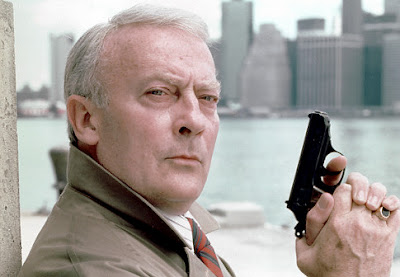 Tradecraft: Paul Haggis In Talks To Write The Equalizer

After co-writing the last two James Bond movies, Paul Haggis is in talks to take on another famous British secret agent: Robert McCall.  Russell Crowe has been attached to the project for some time, not only to step into Edward Woodward's shoes as star, but also to produce (along with Jack Ryan producer Mace Neufeld and a host of others).  According to The Hollywood Reporter, Crowe and Haggis recently worked together on the thriller The Next Three Days, and are apparently keen to re-team.  McCall is a former secret agent turned private vigilante who helps people with problems who find the odds against them.  While it seemed pretty clear that McCall and David Callan were separate characters, the extra-textual baggage of Woodward's previous spy role certainly helped sell the conceit of the TV series, which ran from 1985-1989.  Crowe carries far less spy baggage, but he has been known to be convincing as a badass, which is crucial for the part.  The Equalizer was in development for years at The Weinstein Company, but didn't go anywhere thanks to TWC's financial problems. Now, apparently, Crowe and his cronies have full control, and are shopping it to other studios.  Maybe if this movie version actually happens, Universal will finally get around to releasing the rest of the TV show on DVD!  (So far they've only put out Season One.)
Posted by Tanner at 1:35 AM

Crowe is literally too young to be Robert McCall. Also, I'm not his biggest fan so, I'm on the fence with this one.