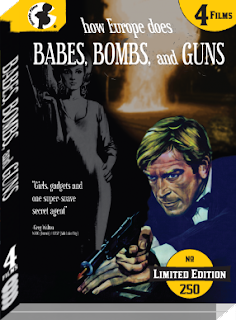 After nearly a year's silence, Eurospy DVD distributor Dorado is back in action! DVD Sleuth sounds the alert that the company has announced a Eurospy box set called How Europe Does Babes, Bombs and Guns. It will include previous Dorado Eurospy releases Mission Bloody Mary (1965), From the Orient With Fury (1965) and the great, great Special Mission Lady Chaplin (1967)... as well as a rare, never-before-available title, Electra One (1967). That's great news for relatively new fans of the genre who don't already own the three Ken Clark movies (the last of which co-stars Bond Girl Daniella Bianchi), but not as good for seasoned Eurospy buffs who probably already bought them.  However, it's not nearly as bad as it could be, because the box set will retail for just $24.95, which is only about five bucks more than you'd probably pay for the one movie on its own. At any rate, there will be no time to dither because the set is strictly limited to just 250 copies, so you'll have to act fast.  As to when you should act fast, well, that's kind of nebulous at the moment.  Dorado hasn't announced the street date ("coming soon"), and their fans have long learned to wait very patiently for their releases.  (Hopefully this new activity means that the long wait is almost over for their previously announced Fantastic Argoman DVD, though!)

Unlike the three "077" movies, however, Electra One (listed in The Eurospy Guide as "Elektra 1") will not be widescreen.  It's a 4:3 full-frame release.  Electra One follows a suave cat burglar known as "the Lynx" (George Martin - not the Beatles producer) who becomes embroiled in one of those plots to sell a designer freak-out drug to the Chinese while staying one step ahead of the CIA and the KGB.  Rosalba Neri and Vivi Bach co-star.

Go here to read about all Eurospy titles currently available on DVD in Region 1.
Posted by Tanner at 11:12 PM

Just a heads-up to say this is now up for pre-order, mine is in!

I just got through mine a couple of days ago and loved it! A great collection of some top notch Eurospy films. I'm looking forward to what Dorado brings to the table next.

Only 250 sets available, at $25 retail, 6 years ago. Grand total of $6250 gross sales on all sets. Dorado can hardly be clearing much profit with this. How can a company be so foolish and retarded as to limit production like this. In fact the production and package costs alone would be much higher on such low volume, further limiting net profits to practically nothing.