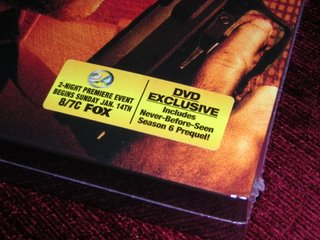 Disc 7 of 24 Season 5 contains a pretty impressive collection of special features. Besides the endless assortment of deleted and extended scenes, the meatiest one is a 40 minute documentary entitled "Unsung Heroes: 24 Camera Department." It's quite an interesting look at the technical side of a TV show that's a lot more demanding of its shooters than most. A "Supporting Players" featurette profiles the casting department. The most notable tidbit seems to be that they don't really know if a character is going to end up being good or bad, die quickly or live on when they cast the parts. Various guest stars are interviewed, and the featurette lost me pretty early on when Sean Astin starts talking... and never seems to stop. The guy's a good actor, but he sure does like the sound of his own voice.

There's a "100th Episode Reel" that runs about 7 minutes. Unlike many such reels included on DVDs of long-running shows, this isn't a gag reel and doesn't contain any behind-the-scenes footage. It's an extended clip reel, showing montages of various characters, killings and explosions. It reminds you that Jack sure does kill a lot of people. It's pretty exciting, and showcases the good stuff enough to make you forget about the bad. But the featurette that really made me want to give 24 another chance (I've quit it twice) is one on "Music by Sean Callery." This is a very good short documentary (about 10 minutes) on the series' talented composer and his craft. He demonstrates by scoring one scene several different ways, and the differences in how it plays out are striking. (Two volumes of Callery's tremendously effective score music are available on CD; the second one, containing music from seasons 4 and 5, just came out. His other major contribution to spy music, the score to the James Bond video game Everything Or Nothing, is available as a download only.) If you only watch one special feature on this DVD, this is the one.

Of course, I know the one most people will go straight to is the "Season 6 Prequel." And... it's not really worth it. Like last year's, it's basically a car commercial. Other than glamor shots of a strangely immaculate Toyota SUV, it's mostly Jack being tortured by the Chinese. And he's got a beard, like Brosnan had at the beginning of Die Another Day after being tortured by the Koreans for months. Only faker. Still, it's a good way to pass ten minutes or so for people desperate for a bit of Jack Bauer prior to the Season 6 premiere, and it is cool to see him in non-real time for once. (Or twice.) The final feature is a "24: Behind the Scenes Book Sample" and it's just an ad for the book followed by an extremely brief still gallery.

Still, the 100th Episode Reel and the montage they put together showcasing Callery's score are probably enough to get me tuning in this year, even though Eddie Izzard reportedly quit the show after only a day of filming! I was so looking forward to his joining the cast...
Posted by Tanner at 1:23 AM