Review: James Bond/Moneypenny Short Story "For Your Eyes Only, James" 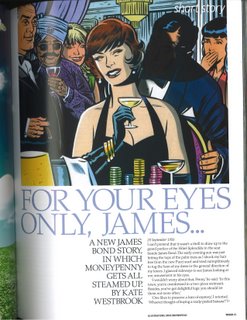 The November issue of British magazine Tatler is finally hitting US newsstands! Why is this of interest to spy fans? Because it contains the first new James Bond short story in seven years!*

The story is (rather unoriginally) titled "For Your Eyes Only, James" and credited to Kate Westbrook. Of course, we all know that "Kate Westbrook" is really Samantha Weinberg, author of the clever and entertaining Moneypenny Diaries series of Bond continuation novels. It runs 4 two-column magazine pages (but might just make 10 in book form) and features three cartoonish illustrations by Mick Brownfield.

Since the story is so brief and basically hinges on a gimmick, I’m not going to reveal any of the plot in my review. Instead I’ll focus on the details and remain as spoiler-free as possible.

The story is dated "September 1956" but, other than that, does not read like a diary entry. It features no slang or shorthand, as the Moneypenny Diaries do, and no footnotes. It reads like a short story (narrated in the first person by Moneypenny), and is structured as such. It reminds me most closely of Fleming’s "007 in New York" (originally published in the American edition of his non-fiction Thrilling Cities) or Raymond Benson’s "Live at 5" because if its brevity and structure. All three of those are almost vignettes more than short stories, and in all but the last, the actual action of the story is related quickly in the final paragraph by an omniscient narrator. (Fleming in the case of "007 in New York," presumably "Kate Westbrook" [supposedly Moneypenny’s niece who "discovered" her "diaries"] in the Tatler story.)

I quite enjoy Ms. Weinberg’s writing, and it’s a treat to see her cut loose from the constrictions of the diary format, however briefly. While I might not have pegged Miss Moneypenny as one to go in for Flemingesque prose, the author has fun with variations on Fleming’s own language and style in describing the casino at Royale-les-Eux. (Yes, that casino!)

Try: "The atmosphere was heavy with barely suppressed tension, almost sensual in its intensity: for the first time I understood what made men into gamblers."

Or: "As he passed us, I caught the scent of sweat merged with stale smoke."

While the latter is about as direct and obvious an homage to Fleming’s famous opening line of Casino Royale as Charlie Higson gave us describing Eton at the beginning of SilverFin, the former is first rate pastiche. It’s not distracting in its context, but it might well be a lost Fleming passage! Well done, Ms. Weinberg.

As with The Moneypenny Diaries, it is clear that the author has done her research. There are plenty of Easter eggs for readers familiar with Fleming, including a nice reference to a certain dress in Casino Royale. The character of James Bond is even a bit more spot on than in Guardian Angel, the first Diary. He exhibits the same easy charm with Moneypenny that he does with many of Fleming’s Bond girls, and the lines sound right (with the possible exception of one that follows the bit about the dress). Then he switches abruptly to business. Moneypenny’s reaction ("The switch from pleasure to business was a jolt, yet I couldn’t let it show") could easily be that of Vesper Lynd, Tatiana Romonova, Honey Rider, or any of the other women who have witnessed 007's sudden transformation. Vesper in particular makes similar note of it in Casino Royale.

Bond uses Benzedrine, as he does when preparing for his epic card battle against Hugo Drax in Moonraker and on several other occasions in the midst of a mission. (Strangely, in Casino Royale it was villain LeChiffre who popped the drug, and at that point 007 saw it as a disgusting habit. Guess he changed his mind!) Surprisingly, he carries a revolver instead of his trusty Beretta. Since this takes place before Doctor No, when he received his one-time use Smith & Wesson snub-nose (along with his famous Walther PPK), I guess we’re to assume it’s the long-barrel job he keeps in his Bentley.

My only nitpick with the story involves its gadgets. Q-Branch issues Moneypenny with a dictaphone wristwatch capable of playing back twenty minutes worth of conversation. Could such technology exist before microchips? (Maybe it could; I’m certainly not an expert.) Also, the main gimmick hinges on the use of "heat cameras," presumably infra-red technology. Did this exist in 1956? Perhaps it did; I think the OSS used some variation on the technology in WWII. Still, something about it just didn’t sit right with me. 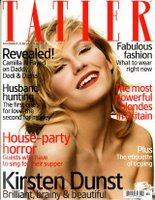 Overall, though, "For Your Eyes Only, James" is a fun and fully legitimate James Bond short story. I’d recommend every fan of the literary exploits of 007 track down the November issue of Tatler. It’s a bit hard to find in the US, but better newsstands and some bookstores should carry it. At $8.99, it’s a more affordable taste of Ms. Weinberg’s take on James Bond than importing the Moneypenny Diaries from Amazon.co.uk, since the books have yet to see publication over here. And, as a bonus, you get that sexy Kirsten Dunst cover!

*The last one was "Live At 5" by Raymond Benson, published in an issue of TV Guide with Pierce Brosnan on the cover around the time The World Is Not Enough hit theatres in 1999. Benson published three Bond short stories all told, the other two both appearing in Playboy. None have been collected. The last collection of Bond short stories was Octopussy and The Living Daylights, published posthumously in 1966 collecting those two Fleming stories. The American paperback also included "The Property of A Lady," and the most recent edition adds "007 in New York."
Posted by Tanner at 8:13 PM

Please tell me how to get a copy of these stories. I am unable to find a decent copy here in the US.