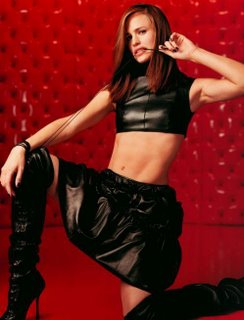 Alias: The Complete Collection hit shelves today in a really nifty "Rambaldi artifact" cube collecting all five seasons of J.J. Abrams' cult spy series starring Jennifer Garner. I haven't got it and probably won't, since I have seasons 1-4 individually already, but DVDTalk has a really in-depth review with lots of pictures of the snazzy packaging. For those of you like me who have been collecting the seasons individually, you can also get Season 5 on its own. (Though you'll still be missing the exclusive bonus disc that only comes with the Complete Collection...)

Alias was a fun series that's well worth checking out for any spy fan, if you haven't already. It was one of the few recent shows to successfully provide a weekly dose of Bondian espionage fantasy, combined with some sci-fi/mystical elements. It's perfect for viewers who like prefer their spy series more "fun" than 24. The first two seasons are truly awesome entertainment, the third one's not bad, and the final two have their moments, though the series had really gone downhill by the time it reached its disappointingly lackluster finale earlier this year. Jennifer Garner made a wonderful, sexy lead, Victor Garber was brilliant as her spy dad, tougher-than-tough Jack Bristow, and Ron Rifkin was deliciously sleazy as bad guy Arvin Sloane. The rest of the primary cast was also great, and the series boasted some stellar guest stars including the one and only Sir Roger Moore (in the first season).

24
In other Spy TV news, TVShowsOnDVD.com has revealed that Fox will release the first four episodes of the new season of 24 on DVD right off the bat when Season 6 debuts in January.
24 - Season 6 Premiere will retail for $14.98.
Posted by Tanner at 11:56 PM