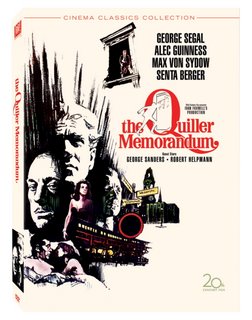 Today Fox releases its batch of "Classic Spy Films" to coincide with the Bond release. This includes The Quiller Memorandum, The Chairman and The Ultimate Flint Collection. All the discs come in very nice packaging utilising stunning original poster artwork. Boy, I really sound like a studio press release there, don't I? I can't help it. I like original poster artwork. I like it a lot, and I can't understand why other studios DON'T use it! (I'm looking at you, MGM, with your lousy photoshop Bond covers!) Furthermore, each disc (or discs, in the case of Flint) is housed in a glossy cardboard slipcase with the same artwork. Sure, it makes it a little bulky, but it looks very classy. And Quiller even features alternate poster artwork on the back!

This is the first time on DVD in the US for The Quiller Memorandum. Quiller was written by playwright Harold Pinter based on a novel by Adam Hall (the pseudonym of Elleston Trevor) and stars George Segal, Alec Guiness, Max Von Sydow and Eurospy favorite Senta Berger.

I'll post my thoughts on the movie tomorrow. As for the features, apparently we get less than was offered on Network's Region 2 release earlier this year. I believe that release had some original on set interviews with the stars, among other things. What Fox offers is the original trailer and a commentary with "film historians" Eddie Friedfeld and Lee Pfeiffer. Spy fans will probably be familiar with Pfeiffer as the co-author of such books as The Incredible World of 007, The Essential Bond and The Films of Sean Connery. I'm naturally dubious about any commentary tracks from "film historians," especially when talent from the movie is still alive. (Where was George Segal? Where was Harold Pinter??? That would have been some commentary!) However, I'm happy to report that Pfeiffer and Friedfeld do a good job on this one. They do go off on tangents and make some of those annoying jokes that "experts" tend to make, but th 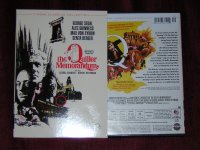 ey know the material and they're clearly friends and have a good chemistry with each other. There's rarely a pause on the track, and they sometimes cut one another off or finish each other's sentences. What makes their track really interesting is that they disagree about the movie. One of them (I'm afraid I can't recall which) really admires it and the other is more ambivilant. They debate Segal's somnambulent performance and Pinter's refusal to ever give us any information about his characters. Both make good points. It's definitely worth a listen.

Overall, I'd say the movie is more a Pinter movie than a spy movie, but it still belongs in any thorough Sixties spy collection.
Posted by Tanner at 11:43 PM